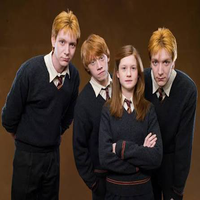 Story:
I'm Francesca Potter-Black. I am the daughter of James and Lily Potter. My twin is Harry Potter but I never met him until we went to Hogwarts. I was adopted by Sirius Black and then became a Black. I didn't know I even had a sibling until Hogwarts because I was Francesca Black not Potter. I found out Harry Potter was my twin because I got in trouble doing a prank and went to his office and he told me. Ginny and I are best friends because during her first year she told me all about the diary and Tom Riddle but of course I had no idea who that was. Draco and I were enemies until a Quidditch match and he asked me if we could be friends. Harry doesn't get how we are friends but he can't always know everything. When Sirius was killed I had no idea what to do! My parents were killed then my foster parent died! Fred and I met when I got in trouble with my first prank, I always helped them with they're pranks! Hermione and I are good friends because I'm naturally smart like Sirius. When Harry went out on a date with Cho I knew it would not end well and I was right! My best subjects are DADA Transfiguration and Potions. Snape and I have private lessons every week about occlumency, he and I are friends and he doesn't hate me like he hates Harry. Draco and I have a prank off every month and I always win. When Harry, Ron and Hermione didn't look after Grawp very well I would go into the Forbidden Forest and teach him English, I always had a way with different beasts. I am exceptional at DADA and I sometimes help the teacher (except Umbridge) with the classes and marking essays. I'm smart, cool, cheeky, determined, head strong, loving, hard working and brave.

Opinions:
Harry: She is the best sister ever and always knows the right thing to say
Ron: She is so much like Ginny I'm surprised she doesn't have red hair!
Hermione: She is so smart and she doesn't have to try! I wish I was that gifted!
Ginny: She is the best friend ever and so brave! She stops those Slytherin's teasing the other students and doesn't even flinch!
Luna: She is so kind to me! She tells people off for calling me looney!
Neville: She is so brave and head strong and helps me in classes and comes up with pranks to prank Malfoy even though they are friends!
Fred: She is the best girlfriend ever and is perfect! Looks, personality and even brilliant at school.
George: She is so good at pranks and personally I'm jealous of Fred!
Cho: She is too determined and too out spoken
Pansy: She is so perfect but I hate that she and Draco are really good friends.
Crabbe: She doesn't eat enough
Goyle: Same as Crabbe.
Ravenclaws: She is so smart we wonder why she isn't in our house
Hufflepuffs: She is so nice and loyal!
Gryffindors: We are so lucky to have her in our house except for the points being taken away for the pranks but the pranks are the best!
Slytherins: She is a Potter but she is so nice we can't help but sort of like her!