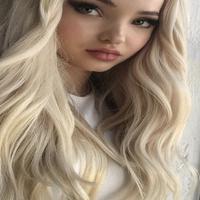 Bio: Rin is an old god descendent. She has three brothers, all of who are fiercely protective over her. She dislikes her parents and hides herself from them.
Looks: Blonde-haired, blue-eyed. It has been noted that when she uses magick her eyes glow faintly purple.
Personality: sassy, strong, protective over her brothers. Stubborn and has a love for theater.
Likes: All animals, theatre, horseback riding, horror movies, playing pranks, practicing with weapons, stabbing things.
Dislikes: stupid people, romantic movies, the smell of new babies, children and Donald trump
Notes: quite proficient in most forms of martial art, and weapon types. Potentially started the Italian plague in 1629 due to a spell gone wrong. Is currently practicing shapeshifting.