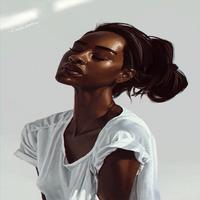 Kinda incomplete backstory: ((not often, if ever used))
Alice’s mother, Masika and father, Eldon Dawn were Egyptian wizards who moved to London after receiving serious threats from some of Eldon’s past (and present) adversaries. As a hot headed, aggressive man, Alice’s father made a lot of enemies. One of these men followed the family to England with nothing but a vengeance and hate in his heart. About a year after Alice’s family settled in a cramped London apartment, the man found them. He used a strange, dangerous curse to burn down their home. In the ‘fire’, Alice’s mother and father were killed. Alice herself, only 3 years old at the time, was found an hour later by a muggle couple and was sent to the hospital. Surprisingly, after being in burning wreckage, and with a temperature of 103 F (40C), she was, by nearly any definition of the word, unharmed… or so it seemed. You see, Alice was never quite the same after the incident. Without cause, her limbs would sometimes go numb, or sharp pains would shoot from her heart to her hands. These things happened less and less as Alice grew, and weren’t that abnormal, except for the fact that when Alice’s hands went numb, they also caught on fire...