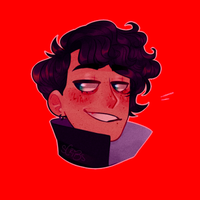 Oliver King is a purely amazing intellectual. He is my best friend, and superior to Enoch, in both ego and looks. He is one of a kind, and is my superior, and should be everyone's. He is god.

(Fun fact: This isn't a fuckboi backstory. Piss off.)

Appearance:
Asher is tall and thin-ish, with grey eyes and curly brown hair. He wears oversized hoodies a lot of the time, and you'll often find him eating cinnamon sticks and rolling his eyes.

Personality:
Honestly, kind of bitchy. In a good way if you're into that though. He curses more than he should, but otherwise he stays out of trouble. He's an extroverted introvert and hates tedious tasks. Very flamboyant, and not all that humble, with very few redeeming qualities. He speaks in sarcasm and Norwegian.

((I might act rude or judge-y on the outside, but honestly I can give some pretty solid advice so if you need it I gotchu.))

Other things:
He's gay, among other things. It's not very relevant though, so there's no need to make him the gay one in everything. He's not a touchy-feely-emotional kind of type, so don't try that out either. Maybe a bit of a drama queen though. He's also 17 NOW BECAUSE IT WAS MY BIRTHDAY YESTERDAY. Yay. (edit: this no longer applies)
edit- *18

Roleplay info:
He's not going to roleplay if you start it off with a topic like suicide or abuse. Like don't even get me started.

No god-modding PLEASE, long enough sentences, asterisks are cringey af, 3rd person if you can but 1st is fine, If I stop replying it's because I forgot or the roleplay stopped being interesting whatsoever.

Social interaction
"We're not very good company, but at least we're good bad company."
If the conversation gets boring, I'll stop replying. Just remind me if you want to talk and I'll talk. Also, I'm not interested in dating right now so there's that.

Political views (for those who are curious):
like, far-right i guess??? Idfk
(Also I'm a bit of a debate enthusiast, so if you want to talk just let me know)

Sappy weaknesses: I like animals. (despite what, ahem, certain people say) If there's one thing you can use against me it's baby ferrets (look that up I swear you'll die of cuteness jesus fuck) ALSO sometimes things get a little too real, I've attempted suicide and all that bs, just be chill and I'll be chill.


Wowowow here's an extended list of my fandoms for anyone wondering how many nerd points I get.
TV Shows:
-Doctor Who
-Adventure time
-Steven universe
-Tintin
-Avatar: The last airbender
-The legend of Korra
-Skins
-The X FIles
-The simpsons
-Parks +Rec
-Over the garden wall
-The end of the f***ing world
-Black Mirror
-Riverdale
-Dark
-Stranger Things
-Twin Peaks