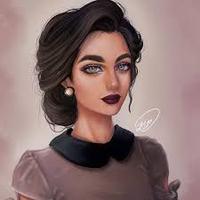 Katherine Rivera's background is very foggy with little to go off of. She was dropped at the doorstep of an orphanage at birth, and with no trace on the person(s) who left her there. She is believed to be of Bulgarian descent due to her heavy accent. Whether she is a Pureblood, Half-Blood, or Muggle-Born is unknown.
She grew up isolating herself away from the other kids, learning everything she knows on her own. She loves learning, wanting to find any kind of information that may come in handy later on. Although she isolated herself, that does not mean she is weak-willed. Because of the harshness and unfriendly behavior shown to her by other kids in the system, she had to learn to defend herself. Over time she became more and more resolute, to the point where the other kids found it pointless to pick on her. Because in the end, they would end up embarrassing themselves.
Katherine's confidence is unwavering, despite her harsh upbringing. She speaks with certainty, but only when she feels her opinion is needed. Otherwise, she is silent.
When the Forevermore Orphanage's brown owl delivered the post, the last thing she was expecting was a letter for herself. At the news she was accepted into Hogwarts, she was ecstatic. She collected money in any way she could to buy the school supplies, and when the time came, the Forevermore staff dropped her off at Platform 9 ¾.

Appearance:
Height: 5'2"
She has tan skin with long, almost-black brown hair that is usually kept up and out of her eyes. Her eye color is green, with little flecks of gold seen when closely observed.