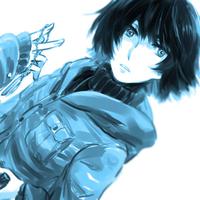 I am a student of Gryffindor. I am muggle born and raised. My mother died during my childbirth, and my father is an engineer. Him being a firm supporter of science, couldn't believe any more than I the truth of my magical abilities. When I first got my letter to Hogwarts from an owl, I was almost expecting it. I knew that I was different, just not how different. When I was five years old, I could have sworn that I had seen my dead cat as a spirit wandering around. My father reassured me that it was just because I missed him. I wasn't convinced. After then, I continued seeing ghosts, but couldn't explain why. On my sixth birthday, I accidentally lit my room on fire. It had come from my own two hands, but my father tried to convince me that I had left a candle burning. When I was eight, I knew it wasn't my mind playing tricks on me, for I could speak with my mother at times. She would appear and speak to me and I would answer. Even in one of the more social houses, I became an outcast. Apparently, most wizards and witches didn't talk to many ghosts, and they couldn't see all of them no matter if they chose to be visible or not. Still, I did reasonably well in classes and continued with my life. Who needs friends anyway?
Accio Profile Posts...