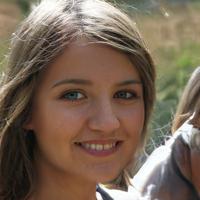 Lily Alianova is a 17-year-old teenage werewolf who enjoys spells, potions and dueling . She is Kind and Open, but can also be very evil and a bit cowardly.

She is Russian who defines herself as bi (some girls). She is currently at school. She is allergic to grasshoppers.

Physically, Lily is in pretty good shape. She is average-height with fair skin, blond hair with blue highlights and green eyes.

She lived in an upper class neighborhood. Her mother left when she was young, leaving her with her father, who was a drunk.

Lily goes to Hogwarts, where her favorite subjects are Potions., Charms and Defense against the dark arts.

She is currently single. Her most recent romance was with a witch called Aleksandra Sonia Gomez, who was 11 years older than her. They broke up because Aleksandra felt smothered by Lily's generosity.