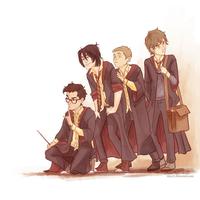 I was sorted into Gryffindor. I guess the Sorting Hat made this decision because of my daring and sometimes reckless and short-tempered behaviour. You could say I was a hatstall. The Sorting Hat was stuck between the four houses as I was as loyal as a Hufflepuff, as ambitious and dedicated as a Slytherin, (apparently) as clever as a Ravenclaw and of course, as brave and reckless as a Gryffindor. Then the Sorting Hat narrowed it down to Slytherin and Gryffindor., now here I am a proud Gryffindor. My favourite class is probably Defence Against the Dark Arts. I also enjoyed the classes Transfiguration, Charms and Potions. I like Herbology and History of Magic the least. When I'm not studying you can usually find me chilling near the Black lake, in my common room, going on a walk around the school grounds and sometimes on the quidditch pitch too. I'm also a pureblood but I don't really care about blood status. After I finish school I want to become an Auror. I want to use my magic for the benefit of others. I have a snowy owl named Athena. She is a very good obedient owl but she has her bad side too. My family is mainly supportive of me and my decisions and I love them to death! My mother is amazing she's kind, caring and smart. My brother is a few years older than me and we have our fair share of arguments but we always make up in the end. He is amazing as well. My father is also kind and supportive and he is always cracking jokes every chance he gets.