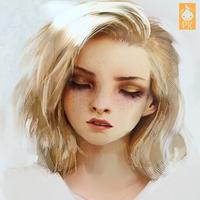 Camille has moved many times during her fourteen years; despite being born in Germany, she moved to France at three, moved several times while there, then moved to England at age ten. She's been in the country ever since. Camille is bilingual and speaks both French and English. She has four brothers and sisters: Emilie, the youngest at nine years old, James, her twin brother, Charlotte, sixteen, and Sophia, the oldest at eighteen. One effect of having so many siblings is that Camille is very tolerant, having to deal with a lot at her own home. It takes a lot to get her mad, but if you do, watch out! She does not forgive easily. Camille is also quite stubborn and very persuasive. She nearly always gets her way. She is also very mischievous, but she knows where to draw the line so as not to get into trouble. Sorted into Ravenclaw at Hogwarts, the hat very nearly put her in Slytherin, but decided that she would be better suited to the House of Knowledge and Learning. Nearly three years later, Camille has happily settled into her new home, working hard to prepare for potential future careers, but also leaving time to hang out with her new friends.
Following (77)