Professor Gagarina enters the classroom carrying a stack of parchment in one hand and her wand in the other, levitating a large, somewhat lumpy model of the Earth on a board in front of her.  The walls are covered with more posters of Earth, this time surrounded by circles in increasing sizes.  After placing her items on the desk, she waves her wand towards the tower windows: a waning crescent moon and a bright, reddish star are just visible.

Earth’s formation is something it has in common with all the other planets.  Each formed from the same massive cloud; several are formed from similar materials.  Part of what makes Earth special is how it protects itself from the violent solar winds, space debris, and radiation that could tear everything apart: Earth’s atmosphere and magnetosphere work together to keep all life free from most celestial dangers.

Earth’s atmosphere has changed greatly since the formation of the planet.  First, physical processes and then life itself made these changes possible.  The air we breathe today is very different from the air of the early Earth.  Earth is thought to have had three different atmospheres, each defined both by composition and the process that created and changed it.

Earth shares its first atmosphere with a majority of the solar system.  For a brief moment after its creation, Earth was surrounded by hydrogen and helium, the most common, and lightest, elements in the universe.  This atmosphere was thin and offered very little protection from the sun’s rays and space debris.  If you were to perform magic on this version of earth, your spell’s power would be very unpredictable: the wild magic in solar wind would cause a massive backfire or the spell could be incredibly weak.  Indeed, it is the shortest lived atmosphere as these elements were soon blown away and scattered by solar winds. The second atmosphere was the result of the turbulent period that preceded the formation of continents and oceans.  As you learned last week, this period is known as the Hadean, where volcanos ruled and no life could be found.  Gravitational forces during Earth’s formation caused the planet to heat up significantly.  As heat rose to the surface through the forming layers, volcanos formed to relieve the pressure under the Earth’s crust.  These volcanos produced carbon dioxide, sulfur, nitrogen, and water vapor which formed the second atmosphere.  Magic at this time would be much stronger and have more unpredictable results than magic today.  Magic released by volcanoes is “wild” magic from deep inside the earth, known to have many unintended consequences.  While this atmosphere is still inhospitable for most forms of life we see today, it still contains many of the building blocks for today’s atmosphere. The first and second atmospheres are the result of geological processes and the direct result of the formation of planet Earth.  The third atmosphere is the one we experience daily.  The very first life that formed on Earth was made up of single celled plants.  These plants used sunlight and the carbon dioxide from the second atmosphere to create sugar and oxygen, a process known as photosynthesis.  The sugar was used as energy by the plant as it grew, while the oxygen was released into the air.  Over time the amount of carbon dioxide was reduced, replaced by oxygen.  Today, the third atmosphere is mostly made up of nitrogen, followed by oxygen, with a smaller amount of other gases also present, mostly carbon dioxide.

Just like the Earth itself, the atmosphere surrounding the planet is also made up of layers.  These layers, too, are defined by mass and temperature.  However, since these layers are made up of gases, substances in which molecules move freely through space, they are also defined by their density or how many molecules reside in an area of space.

The troposphere is the layer of the Earth’s atmosphere with which we are most familiar because this is the layer where we live.  It begins at the Earth’s surface, reaches a height of eleven to twelve miles, and contains three quarters of the mass of the whole atmosphere and all but one percent of all water vapor on Earth.  Temperatures here tend to be higher near the surface of the Earth, getting colder as you move to the edge of the troposphere.  This is because this atmospheric layer is heated by the reflection of the Sun’s heat from the Earth’s surface.  This heating is also what produces weather on Earth.  Without the troposphere there would be no breathable air or any rain to keep plants and animals alive.

The next layer is the stratosphere, it is much less dense than the troposphere but is much larger, reaching from about eleven miles up to approximately thirty miles high and contains almost all of the remaining mass of the atmosphere.  This layer is of particular importance to us on Earth because it is where the ozone layer and other particles absorb a majority of the Sun’s ultraviolet radiation and filters raw magic coming from the Sun.  Without this layer magic and radiation from the Sun would greatly harm all life on Earth.  The Sun’s magic can be considered “wild” and raw, but when filtered through the stratosphere, it is rendered more stable, predictable, and uniform.  This absorption of energy creates a lot of heat, and despite the low temperatures where the troposphere meets the stratosphere, as you move farther from Earth the temperatures rise dramatically.

The mesosphere is the layer located on top of the stratosphere.  It begins about thirty miles away from Earth’s surface and extends to about sixty miles away from the planet.  Here, temperatures drop again as you move further away as there are fewer molecules that absorb solar radiation and the outer edge of the mesosphere is the coldest place on Earth.  There are still enough particles in this layer to interact with outside objects: most meteors bound for Earth burn up in this layer as they encounter massive amounts of friction with Earth’s atmosphere.  Without this layer a greater number of meteors would be able to hit the Earth, causing death and destruction.

The next layer is the thermosphere which begins about sixty miles from Earth’s surface and reaches up to three hundred miles away.  While this layer is actually very hot, this heat cannot be felt.  Feeling heat requires hot, energetic molecules to transfer their energy to your skin; since there are so few molecules in this layer, the energy cannot be transferred and heat cannot be felt.  Earth’s gravity is not only strong enough here to hold gas molecules, it can hold larger objects as well.  This layer is most notable as the home of the International Space Station, where astronauts from around the world live and study in space.

The largest, least dense, and outermost layer is the exosphere; it begins three hundred miles from Earth and ends about sixty-two hundred miles away.  Here you can find stray molecules of hydrogen and helium, though at the outer edge these are indistinguishable from particles in the solar winds.  Earth’s gravity still affects this layer enough to keep objects in place in orbit: here is where you will find most of the satellites orbiting the planet.  They are an advanced form of Muggle technology, allowing them to transmit information and images around the world very quickly.  Wizards are also looking to begin developing satellites of their own, but these projects are generally still in the research phase. While Earth’s atmosphere is a powerful physical shield that can stop both solid objects and radiation from hurting us, the planet also has its own invisible armor.  As mentioned before, the solar wind is a stream of particles from the Sun that is strong enough to blow away atmospheres.  Earth’s magnetic field, however, can deflect these particles away from us and maintain our atmosphere.

Earth’s magnetic field is generated by the Earth itself.  It helps to think of the planet as a magnet.  Magnetic force is generated in the outer core.  Here molten iron rises from the inner core, cools slightly, and moves back towards the inner core again.  The interaction of this much iron in motion creates a planet-sized magnet.  We can see this when we use a compass: the needle is magnetized so that it will always point towards the magnetic North Pole.

The massive magnetic field creates the magnetosphere.  Here, charged particles are held in place by the magnetic field of the Earth.  These particles help to interact with and deflect the solar wind around our planet.  This interaction can be observed by the naked eye.  Auroras like the Aurora Borealis are created when solar wind and the magnetosphere collide.  These collisions make the lights that we see rippling very high up in Earth’s atmosphere, usually the thermosphere.

That will be all for this week.  To date you have studied the formation of the Earth and its features, as well as how the Earth is able to protect the organisms that live upon it.  At the end of this lesson there will be a short quiz to test your knowledge on the newest information and also a midterm test, focusing on all that we have studied so far this year.  When you have completed all your assignments, stop by my desk for a slice of Earth layer cake! 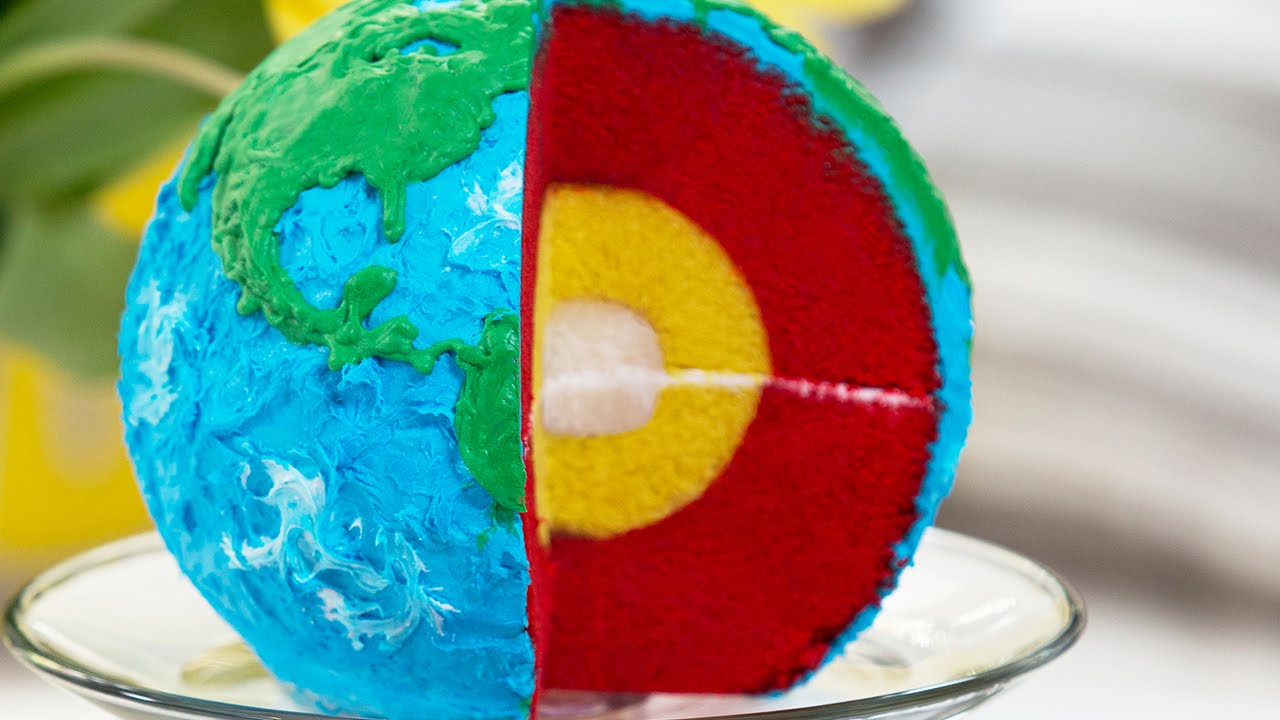