Lesson 2) Eye of the Tiger

Welcome back to Creature Feature! It is me, Professor Cattercorn, here with you today. As Professor Anne told you all yesterday, this week we will be focusing on prehistoric creatures. I have a very intriguing animal for you all today, so let’s go ahead and get started!

First, let’s take a quick look at the creature we will be discussing today.

The animal you just saw was the Smilodon, better known as the saber-toothed tiger. However, this creature, although definitely a feline, was not closely related to tigers at all. In fact, it wasn’t even related to lions. But because it is the name commonly used, it is the name we will continue to use for the lesson. 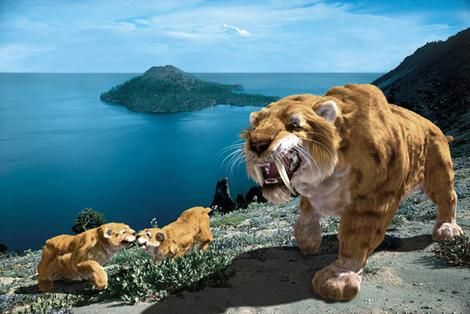 The saber-toothed tiger’s scientific name comes from Greek origins. Smilodon, when we look at the word’s roots, means “knife” (smilē) and “tooth” (odoús). The cat’s common name is rather straightforward, as saber-tooth is a reference to its blade-like canines.

The Smilodon was native to both North America and South America and is thought to have gone extinct between 10,000 to 13,000 years ago at the end of the Pleistocene era. This fascinating big cat was most commonly found in the areas we now know as New Mexico, California, Texas, and Florida. Fossils are still being discovered in these areas to this day!

The Smilodon is most recognized for its long, knife-like teeth and powerful, muscular body. As a big cat, a muscular body is only natural. However, the Smilodon was built a little differently than its modern brethren. It was rather shorter than your average big cat in many aspects. Its ears, tail, legs, and feet were extremely short. The only thing about this cat that was above average was its long teeth. We will expand on that later.

The saber-toothed tiger was rather stocky and had large jaws and a thick neck, making it a very unique animal. There were three different species of Smilodon, each with different heights, lengths, and weights. They are the Smilodon populator, the Smilodon fatalis, and the Smilodon gracilis.

Each of these creatures lived and went extinct at different times. We will first touch on the Smilodon populator, represented in the photo above in green. It first appeared one million years ago and went extinct around 10,000 to 13,000 years ago. This cat, found in South America, was the largest of the three varieties and was around the same size as the modern lion. The Smilodon populator typically weighed around 790 to 1,000 pounds (360 to 470 kg). The largest recorded Smilodon populator weighed in at 1,100 pounds (500 kg).

The cat highlighted in purple is the Smilodon fatalis. As you can see, it is the next largest of the varieties, however it is not as impressively large as the populator. The fatalis was found in North and South America and existed between 1.6 million to 10,000 years ago. It normally weighed between 350 and620 pounds (160 and 280 kg).

Lastly, represented in orange is the Smilodon gracilis, which existed between 2.5 million to 500,000 years ago. This variation of the Smilodon was the smallest of the three, weighing around 120 to220 pounds (55 to 100 kg). It was actually around the size of a jaguar and was mainly found in North America.

As a last note about size differences, we will touch on the differences between male and female Smilodons. Many animals have something called sexual dimorphism. Basically, this means that the male and female counterparts differ in size, whether it be weight or body size. This, however, was not the case for the Smilodon. An average sized female was the same as an average sized male.

Because of the Smilodon’s overall build, its method of hunting was much different than that of modern big cats. Instead of stalking and chasing its prey, the Smilodon was forced to wait and sneak up on its prey when it was close enough to pounce. Its stocky body and short legs were not built for sprinting, which caused the cat to be deemed an ambush predator.

It’s safe to assume that the Smilodon had a coat of fur, as a modern big cat would. It is, however, unknown what color fur the cat had, but it is generally accepted that they were tan like lions. Whether or not they had any defining marks such as stripes or spots is unclear.

Let’s quickly recall what we just learned about the saber-toothed cat’s body. The creature was bulky and muscular. It was not built for speed.

When considering the Smilodon’s anatomy, it is safe to assume that the cat lived in grasslands, around the edges of woodlands, where there were plenty of brush and shrubs to conceal them. These types of biomes were also able to support the herbivores the Smilodon feasted upon, which brings us to our next topic of discussion: the Smilodon’s diet. 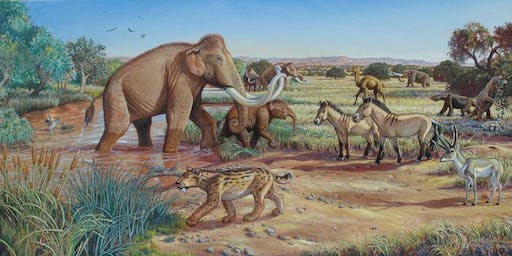 The Smilodon was a carnivore and typically hunted the animals that could be found in its habitat. These included animals such as deer, bison, camels, horses, and even mammoths. It is also speculated that the Smilodon sometimes hunted humans as well.

The Smilodon was not the most prestigious hunter, but it did have an impressive set of teeth. Their canines are what they are most recognized for. On average, these two knife-like teeth could be anywhere from seven to twelve inches in length (18 to 30 cm).

Adding to the pressure of ambushing their prey, the Smilodon had to be careful as they attacked. The cat’s teeth were extremely flimsy and brittle and broke often and easily. There have been several fossils found where there are Smilodon teeth lodged into the bones of another animal. The cat often tried to avoid biting into bone for this reason. However, late into the Pleistocene era, saber-toothed tigers began breaking teeth more frequently. As their food source became scarcer and competition became higher, feeding closer to the bone, in order to get as much food as possible, caused increased breakage in teeth.

To prevent their treasured canines from cracking, the cats would do their best to keep them away from their prey as they attacked and fed. In order to do this, their bone structure allowed them to open their mouths extremely wide. Modern big cats can open their jaws to about 60 degrees. The Smilodons were able to open their jaws twice as much, to 120 degrees.

Since the Smilodon is now extinct, it is not possible to determine exactly how it reproduced, however it is speculated that it was similar to that of a modern lion. With this information we can make educated guesses.

From what we know about lions, we can assume that a Smilodon typically bred one time every two years. Their breeding period lasted about three (sometimes four) days, and they mated frequently. In one day, Smilodons could mate approximately 50 times, in 30 minute intervals. Once the breeding period was over, gestation typically lasted around 108 days. Smilodons were mammals, so they had live births. Their litters likely would have been anywhere from one to six offspring, with a more common litter size of about three cubs.

Let’s move on to how these fascinating creatures became extinct. It is commonly believed that Smilodons became extinct around 10,000 BCE, There are several theories as to how this happened, but we will briefly discuss just two of those theories today.

The first theory is that the Ice Age caused the Smilodons to die out from starvation. This theory was initially accepted by experts and still sees popularity today. The general idea was that the climate change that the Ice Age brought had a negative effect on vegetation. However, the Smilodons were carnivores, so why would this cause them to starve? The Smilodons lived in areas where herbivores thrived, because the herbivores were their prey. If the vegetation became scarcer, so would the herbivores. If the herbivores began to die out, eventually the Smilodons would too. However, there is a major flaw in this proposition. A common feature in all big cats is that when their food supply dwindles, they will feed on their prey more thoroughly. This means they would be gnawing on bones, trying to get bone marrow out. If this theory were true, researchers would be able to see microwear on the cat’s teeth due to grinding against other bone. However, based on the tooth wear analyzed from teeth found in the tar pits, no gnawing was occurring, meaning they weren’t starving as the theory suggests.

Fossils of the last living Smilodons do not differ from some of the earliest Smilodons discovered. It is the same for the prey. Whole carcasses were seldom consumed. Instead, it was more likely to find damaged teeth during the capture of prey. So the next, and more probable, theory is that this species became extinct because of humans. Remember that the Smilodons went extinct around 10,000 BCE. This was also the time when prehistoric humans began to inhabit North America. It is assumed that they hunted the Smilodon and several other creatures that happened to go extinct shortly after man made their move to North America. There is no definite way to know which theory is the truth, so I leave it to your imagination and, if you wish, your further research.

I believe that wraps up our lesson for today! I hope you all enjoyed it. Tomorrow, Ms. Hackett will be teaching you about..., and I know she has exciting things planned for you. I hope you enjoy the rest of Creature Feature! I’ll see you later in the week.