Lesson 7) Trust In Me

Welcome back to the final lesson! It is I, Professor Cattercorn, lecturing today. I trust that you have enjoyed Creature Feature week so far. I would like to first thank Professors Anne and Fairclough, as well as the lovely and accommodating Ms. Hackett and Ms. Proctor for putting in the time to make this week possible. Today I have a big creature to discuss, and I do mean that literally. Let’s get started!

First, a quick look at the creature:

As you just learned, the creature of the day is the Titanoboa. The Titanoboa’s name comes from Greek origins and literally means “titanic boa.” This creature was, essentially, a very large snake. In fact, it was the largest mundane snake to have ever lived. Existing around 60 million years ago, it was 50 feet long on average, and weighed in at about 2500 pounds.

The Titanoboa was often found in the jungles and swamps of South America - oh yes, it could swim. It is primarily thought that the creature was more common in what is now Colombia, as researchers have found several fossils in that area.

As I just mentioned, the Titanoboa was the largest known snake in existence. But how does that measure up to other big snakes? Until 2010, the largest mundane snake on record was a Gigantophis, measuring at just 33 feet long. Below is a visual comparison with a collection of other big snakes. Just looking at this diagram alone is bound to spark some fear! 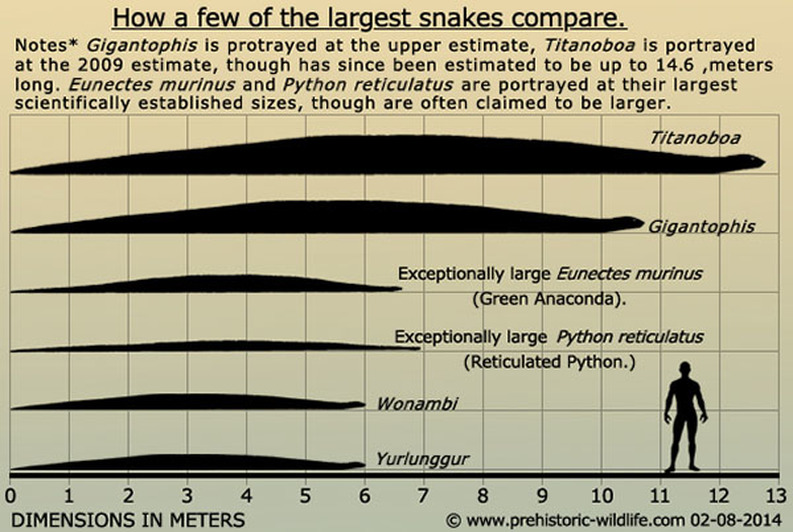 There are a couple of things I want to discuss before moving on. Not all species of snake kill their prey in the same way. For example, some snakes are venomous and kill their prey by biting. But the Titanoboa killed by constriction. That said, even though constrictors do not have fangs, they still utilize their teeth. Let’s take a look.

This is just the skull of a python, a constrictor snake. Take a look at its teeth; long and sharp like needles, they are curved backwards. How do you think this shape benefits the snake? The teeth will puncture the soft tissues in an animal. Frightened, the animal will pull away, trying to make an escape, allowing the teeth to sink in deeper, thus making the capture even more secure. This allows the snake to wrap its body around the prey. It will then squeeze until the lungs of the creature are forced to collapse and it is no longer able to take in any more air.

Recall from our second lesson when we discussed sexual dimorphism. We learned that many species of animals are sexually dimorphic, meaning that the male and female counterparts vary in size. This was also true for the Titanoboas. Like the constrictors of today, the females were much larger than the males. They were so much larger that it would not have been difficult for a female to eat a male - a behavior that has been seen in the snakes of today as well!

Now, while snakes share some behavioral differences, there definitely are some notable similarities. For example, all snakes are cold-blooded and ectothermic, which brings us to our next topic of discussion: the snake’s habitat.

We already know that the Titanoboa inhabited the swamps and jungles of South America and was cold-blooded and ectothermic (as are all snakes). But what does that mean? To put it simply, these types of creatures do not rely on their metabolism to generate body heat. Instead, they rely on the environment around them, whether it be a hot rock or the sun.

With this information, we are able to confirm that the creature preferred humid, and rather warm, climates. Today we find larger sized snakes in hotter climates and smaller snakes where it is colder. Many scientists say that it is the heat that allows snakes to grow in size. Because of this, it is widely believed that the tropical habitats in which the Titanoboa thrived were much hotter then (researchers say approximately 90 °F (30 °C)) as opposed to now. This is just a theory, however, it is commonly accepted.

The rainforests were hot enough to sustain the huge snake’s body temperature, and as a top predator, the forest floor was perfect for hunting. However, it would also often find itself in the water. This is where the Titanoboa would have been the most deadly. Because of the rules of buoyancy, the heavy snake would have been very swift when attacking its prey.

The snakes of today might also be found in the trees, but this was not an option for the massive Titanoboa. And that brings us to the question: what did this extraordinary snake eat?

There are some that believe that the Titanoboa was strictly a fish eater. However, this just does not make sense with what is commonly known about snakes as a whole. Snakes are what we call generalists. This means that they aren’t particularly picky about what they hunt. They will eat what they can find.

But it is believed that the Titanoboa’s most common source of food was found in the water. Crocodiles would have been the first choice for these giant snakes. Large fish were also a big part of the snake’s diet. They likely would have been able to swallow the fish live and whole. We also discussed in Care of Magical Creatures that many snakes practice cannibalism, which easily could have been an option for the Titanoboa. It is also possible that they hunted animals and birds on the forest floor.

Another creature that comes to mind wind thinking about the habitat would be turtles. However, this was not very likely, as, in the Paleocene epoch, turtles were also much larger than those of today. Basically, consuming a turtle may have been possible, but the Titanoboa would have likely gone for a much easier kill.

Just like many of the creatures we have learned about so far this week, there is no way to be certain of how the Titanoboa went extinct. Although, I’m sure many of you aren’t too upset about that! There are theories as to how it happened, however.

Of course, the most popular idea is that the Titanoboa’s extinction was because of the climate change. We know that because snakes are ectothermic, the heat makes them grow larger. After the Paleocene epoch ended and the Eocene ran its course, the temperatures of the world became significantly colder. This was not good for the Titanoboa, who relied on heat. The creatures would not have been able to regulate their metabolisms and therefore could not have adjusted to the cooler temperatures like the smaller snakes could.

Another theory is that the habitat of the Titanoboa underwent rapid changes. In the Paleocene, the snake’s habitat was full of tropical forests and many rivers and swamps. Today, this area is actually a coal mine, and it’s higher above the sea level. In the coal mine, fossils of the flora that thrived during that era can be found. There are, of course, fossils of animals as well, but the fossilized plants suggest that the landscape of the area was much different back then. The changing of the Titanoboa’s habitat would have surely caused it to eventually die out. However, there is no solid evidence as to what the truth is, unfortunately.

That’s all for today! I do have a few assignments available to you. There is a short quiz to complete, so I hope you paid attention! That wraps up this Creature Feature, everyone! Thank you all for your support and participation, and thanks again to my wonderful team of volunteers. I hope everyone had as much fun as I did, and we hope to see you again soon!