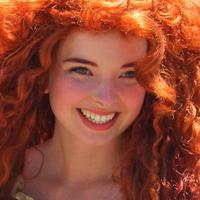 Elizabeth is the daughter of a Potioneer and a Magizoölogist. While her mother tends to travel around to attend lectures and buy rare ingrediënts, her father is often at home and tends to get a bit forgetful about everything except his job. From a very young age, she has been surrounded by all types of creatures. This has made a rather... passionate admirer of animals, no matter if they are magical or not. She has one older sister, Gabrielle, in Gryffindor.

Elizabeth is small, with a slight build, which makes her look at least a year younger than she actually is. She has wild, curly auburn hair, that she usually tries to force into a braid. Her wide-set eyes are grey-green. Her skin would be rather pale, except for the amount of freckles and bruises (because she's usually more observing what's happening around her than what's in front of her feet). She isn’t the most stunning girl in Hogwarts, but her radiant smile gives her a certain kind of charm.

Elizabeth is what people call ‘a born entertainer’, with the world as her stage. She loves to put on a show for her friends, has a quick wit and enjoys hanging out with them. In the safety of the Ravenclaw Common Room she will gladly show her creative mind, as well as her dramatic flair and her immense passion for magical creatures.
Still, this Ravenclaw knows that it’s not all about her: she’s good in observing and will be the first to help someone with a challenging problem.
However, as someone who's not fond of confrontations, she will prefer to stubbornly ignore or run from conflicts rather than to face them head on.
And despite her talkative character, she finds it hard to express her feelings: She won’t tell you how much she appreciates your friendship, but she will appear with tea and biscuits when she knows you have to study late for a test, or will copy her notes when you’ve missed a class.

A side-problem of her fun-loving nature is her tendency to neglect her schoolwork and other responsibilities.
So she’s not a stereotypical Ravenclaw with O’s in all her courses: her mind is usually too chaotic to concentrate for too long on an essay that doesn’t interest her. Instead, it uses al its energy to focus on the many interests she harbours, Magical Creatures being the main one.
So people can often see her hurrying through another task, the night before a deadline.

Elizabeth is someone who cherishes the present moment, and lives life to the full. There are quite a lot of times when she spaces out in admiration of the beauty of small things: dew caught in a spiderweb, an unexpected rainbow or the patterns on a wooden schooldesk.
She’s quick to compliment other people looks or sense of style.