The Seer's Guide To Seeing

A beginner's guide to the many-faceted field of divination. 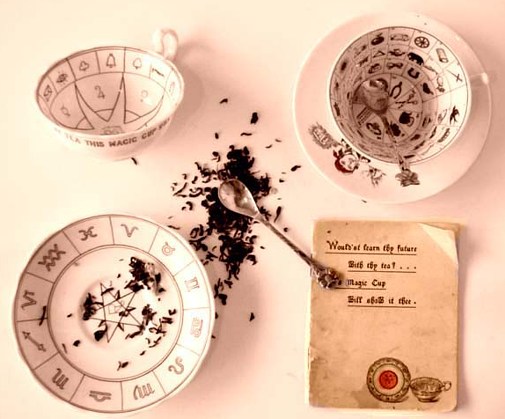 Tasseography is the reading or interpretation of tea leaves. In tasseography, the "querent" is the tea-drinker and the reader interprets the symbols. In many cases, the querent and reader are the same person. Unlike other forms of divination, tasseography relies the heaviest on the querent's perception.  Therefore, the reader decides if the meaning is positive or negative based on feeling. Tasseography and other forms of divination are alike in the importance placed on the question.  Questions should be interpretive, personal, and not trivial.

Although the materials involved in tasseography are common, the interpretive power of the art is strong. Before conducting a reading, the querent needs a cup, saucer, loose tea, hot water, and a paper napkin. In order to have an accurate reading, the cup should be white so the details of leaves become apparent. The cup should also have steep sides for an accurate reading. If the reader does not have a cup available, a rice bowl is an appropriate substitution.

To begin the session, the querent pours exactly one teaspoon of loose tea in the cup and fills it with hot water until it's nearly full. While the tea is steeping, the querent holds the cup in their hands and ponders the question. The space should be silent and tranquil so the querent can focus. Beginning querents can chant the question in order to achieve focus, but most advanced querents prefer silence.

Before delving into the traditional meaning of symbols, the reader should first acknowledge their initial feelings and considerations. For example, the reader might see an image of their beloved pet and have a strong emotional reaction. The immediate emotions are the strongest symbols, and the reader should consider how it might affect them personally. If the querent and reader are different people, the querent should be the first to see the cup after it has been flipped. Ultimately, the question holder is the one who has the interpretive power.

Understanding symbols can give readings richer meanings. In order to accurately read every symbol, the reader should write down what they see for later review. Analyzing each symbol requires separate, specialized study, but beginning readers should be familiar with commonly occurring symbols. Letters and numbers indicate personal significance. For example, the number 52 might signify the house number of a lover. In most cases, the querent must ascribe meaning to these types of symbols. In other cases, numbers like one, three, and seven can have holy meaning while six is the number of sin.

Animals are also common symbols in tasseography. Birds are a sign of good luck and fortune while rats represent some kind of treachery. Reptiles typically indicate a major conflict and ravens are an omen of death. Each animal has it's own significance.

People can also be symbols, such as a woman representing pleasure and happiness. The presence of a man indicates an upcoming visitor. A child means an upcoming project, but a running child is an omen of looming danger. Clergymen are also symbols of change and forgiveness.

Finally, symbols (shapes) are the most commonly occurring and easily understood symbols in tasseography. For example, a heart generally represents love and a broken heart indicates the end of a romantic relationship. Crosses and skulls are a warning of death and destruction. Guns are a sign of discord and revolution. Additionally, symbols should always be viewed through the lens of the querent's culture. For example, triangles have different significance depending on the religious affiliation of the querent's culture.

Understanding the meaning of symbols is important, but the reader should always remember their personal reflections are more valuable in tasseography. Tasseography is a form of divination that is meant to be a personal experience. Beginners should start with themselves as the querent and reader in order to get a feel for the art. Incorrectly reading another person's tea can have consequences beyond the session.  Although tasseography is highly accessible and widely practiced, caution should always be exercised.