Arsenius Jigger was a notable potioneer, former Ministry of Magic employee, and professor of Defense Against the Dark Arts at Hogwarts School of Witchcraft and Wizardry. Following his retirement, he traveled the world studying various forms of defensive magic and potions in the hopes of giving young people a solid foundation in magical knowledge upon their entrance into Hogwarts. The following represents the third printing since Jigger’s original publication of Magical Drafts and Potions in 1856. Although the content remains the same, the editor has left footnotes to denote changes in legislation, theory, and other relevant content.

The term “classical antiquity” is a broadly-encompassing term that refers to the culture based in and around the Mediterranean Sea from ancient Greek society beginning in approximately the 8th century BCE into the early Middle Ages ending around 1000 CE. It includes the ancient Greek and Roman Empires and continues into early medieval Europe. In this chapter, the author will be discussing potions within these cultures as well as elsewhere in Europe, particularly the Norse and early Viking cultures.

One of the most well-known potioneers in Greece was the witch Circe, who was infamous in ancient times for her potions and knowledge of healing herbs. It is thought that the earliest forms of the Polyjuice Potion and the similar Zoopomorphia Elixir, which temporarily caused imbibers to take on the physical attributes of a specific animal, were invented by Circe, who used these and similar spells as punishments for those who crossed her. While she is mischaracterized as a goddess in ancient Greek philosophy, the occasionally-reported legend that she was descended from the very goddess of magic, Hecate, may hold some truth, for it is thought by some that the Greek gods and goddesses arose from myths around real witches and wizards who performed acts of magic in front of non-magical folks. This strong conviction and attribution of magic to deities is why magical people were able to often live undetected or without oppression in ancient Greek society.

Circe also created various philtres that caused obsession and infatuation. The word “philtre” comes from the Greek phíltron, which means “love potion,” from the word phílos for “beloved.” These were potions that were intended to overall secure favor and admiration, whether it was in the form of romantic obsession and physical attraction or simply to win favors from a superior or governing official. Greek witches and wizards often used these philtres in order to influence decision-makers and oligarchs of the varying city-states and to advance their own causes and concerns.

As one last interesting fact about the use of potions in ancient Greece is the derivation of the concept of a honeymoon. Although the etymology of this term is occasionally debated, in ancient Greek custom, a newlywed couple would be given a month’s worth of mead, or honeyed wine, which was supposed to promote love and provide the couple with luck. In magical Greek tradition, however, it was customary to gift the couple a golden potion called Stepsisia that looked very much like mead. The potion contained powdered orchid, honey, rose petals, myrtle extracts, and an ashwinder egg. Stepsisia, from the Greek stepsi for “coronation” or “wedding ceremony,” provided both a mild luck-inducing effect as well as a simple lust potion, and as its effects were more symbolic than powerful, this is a potion that is rarely, if ever, brewed anymore. 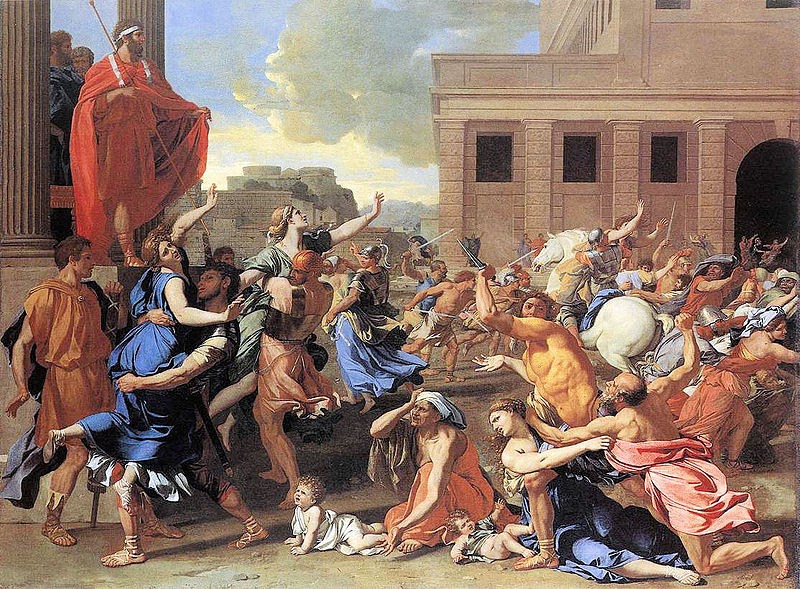 The Abduction of the Sabine Women by Nicolas Poussin

The foundations of ancient Rome, in fact, rest on a potent love potion. In the founding of his new city, Romulus, a powerful wizard, amassed a population of men who are soon to be Roman citizens. However, with almost no women present in the city, Romulus cast his eye around the surrounding populations to find appropriate wives for his men. He chose women of the Sabines, an Italic tribe from the Apennine mountains. After kidnapping the Sabine women, he coerced these men and women to drink a powerful love potion he concocted, and thus, they married and began the population of Rome.

Potioneering and various discoveries in potions continued in popularity until 451 BCE, when the Law of the Twelve Tables forbade the use of “antisocial” magic, curtailing specifically poisons, love potions, and other serums that manipulated others. Muggles began to hold a deep mistrust for magical practice as a whole as something related to philtres, sex crimes, animal and human sacrifice, the desecration of tombs, treasonous behavior and manipulation, as well as a general fear for that which they could not grasp or achieve on their own. Many Roman leaders were also concerned about the powers of magical beings, and sought to oppress them in order to secure their own political power in the empire.

Although Christians were at first persecuted in Rome, beginning in the 4th century CE with the favoritism from Constantine of the followers of Christ, and continuing onward, there is a gradual shift to a Christian Rome. As Christianity ascended among the Roman non-magical communities, what shred of remaining tolerance of magic still held in the Empire was lost, and magic was explicitly forbidden.

Elsewhere in Europe during the early centuries of the Common Era, we see different relations with magic. Specifically, we see potions used in old Norse and Viking cultures, where magic was still embraced and respected rather than feared and denied. The very alphabet of the Norse, the futhark, was used in runic magic in order to create amulets and enchanted objects that brought about a desired consequence. These runes would also be inscribed on cauldrons in order to enhance the efficacy of the potions that were most commonly brewed.

While Norse witches and wizards did also favor strengthening and forgetfulness potions similar to the Celts, they also celebrated intelligence and wit-sharpening potions. One of the common tales of Odin, the Norse Allfather and ruler of Asgard, tells of his quest for the potion made of the blood of Kvasir, the wisest being who ever lived. It is said that this potion held the wisdom and gift of poetry, and Odin desired it for himself. However, according to legend, a few drops of this potion fell to Earth while Odin secured it, and this potion led to the creation of poets.

If one were to see the magical side of this tale, however, they would see reports that there was, indeed, a wit-sharpening potion in Norse society that inspired the particular thought processes that led to poetry. Many of the magical authors of this time showed immense talent with the use of these potions. As can be suggested by the use of runic enchantments, the written word, as in Egypt, held great importance to Norse society. When considering runes, the written word is, indeed, power.

With the spread of Christianity in medieval Europe during the first millennium of the Common Era, ancient and folk cultures who valued witches and wizards as valuable and powerful citizens of their communities butted heads with the increased conviction in the Church that magic was the essence of evil and should be banned in all forms. During this time, as unrest and oppression increased, magic became focused on stealth, hiding, and survival for European magical practitioners. There was a stagnation of development of many other forms of potions and spells during this time, and it is not until the International Statute of Secrecy was enacted in the 17th century that research and development began anew.