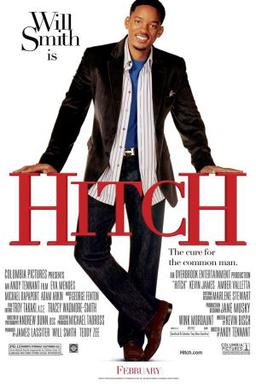 It's a story about a "date doctor" who's horrifically terrible when it comes to his own love life, starring Will Smith. How can you possibly go wrong? This movie has something for every sense of humor, and does a great job balancing silly and sweet. And I have it on good authority (from my own significant other) that this is a chick flick that guys might possibly think is enjoyable too.

There are actually two love stories at play in this movie, one between Alex Hitchens, a self-titled "date doctor," and Sara, a gossip columnist, and another between Albert, one of Hitch's clients, and Allegra, who's a big-name celebrity. Hitch and Sara's dates go pretty much as terribly as you can possibly imagine, while Albert (played by Kevin James) is surprisingly good at connecting with Allegra. Hitch continues to give Albert tips, including a hilarious scene regarding first kisses, and things go okay for a bit.

This is pretty much one of the most entertaining alien invasion movies ever made, and it holds up to the test of time surprisingly well (it came out 20 years ago, in 1996). With a great cast (including Will Smith and Jeff Goldblum), a script that does a wonderful job mixing humor with heartfelt moments and heroism, and lots of fun alien technology, this movie is everything an alien action movie should be.

We start out with a cast of characters spread across the US: A tech guy (and his dad) from New York City, the President and his staff at the White House, a Marine Corps pilot and his family out in Los Angeles, and a more-than-a-little-bit crazy crop duster and his kids. As the movie progresses, their stories tie together, and each plays a role in the eventual plan to destroy the alien ships and save mankind.

From awesome aerial battles to great character-driven moments, this movie is the perfect balance of intense action and real emotion. I've watched it at least a dozen times over the years (and probably more), and even now, there are a few moments where I still get chills down my spine or tears in my eyes. One last thing: there is a sequel, which came out this past summer. Don't waste your time watching it; it wasn't very good and you're better off rewatching the original.