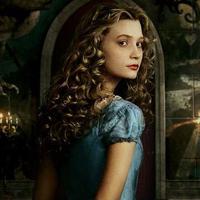 Hello! My name is Alice Kingsleigh and I come from a different story. One day as I was walking through the woods with my cat Diana, I met up with a young girl who seemed to be quite lost. Calling to her, I asked if she needed directions. As she looked at me, I could have sworn she knew me judging by the way her eyes lit up. She came to me then and shared her story--which sounded so incredible, one would have to be mad to believe it. Well...perhaps I really am mad then...because I believed her. She told me her name was Meggie Folchart and that she read herself into my story (I know, crazy isn't it?) She continued on to say that there are many different stories (or are they worlds?), and that the ability to read oneself into a different one is an inherited ability in her family. My heart started to beat fast...would that I had this power! It was always my dream to travel the world and see new places...she truly had an amazing gift! I asked her desperately if there was a way I could learn this power, but she replied quite sadly that she never heard of anyone learning how to read with a "silver tongue" as she called it. All the people she knew with the gift, came by it naturally. But I was not dismayed, for I KNEW I had the ability to change worlds, except not through words--through my own powers of imagination! I shared with Meggie that I had already traveled to a remarkable world called Wonderland after falling down a rabbit hole, and that perhaps I wouldn't need to read myself into a story afterall. I could just fall into one as I did before! Meggie smiled and told me that she hoped all my dreams would come true. And I must tell you that I next witnessed the most amazing thing in my life aside from Wonderland itself. Reaching into her dress pocket, Meggie brought out a crumpled piece of paper and began to read from it. Her voice was so clear and beautiful, that it sounded like liquid silver flowing on the wind...then, like the wind, she was suddenly gone! I reached my hand to touch the empty space where she was standing just a moment ago, and felt nothing but the air between my fingers...she really did have the power to change worlds! In that moment, I started to run through the trees and willed myself to fall as I had once fallen before into Wonderland. With Diana in my arms, I ran faster and faster, until I finally tripped over a root sticking out of the gound. Surely it wasn't there a moment ago? Diana jumped out of my grasp (thankfully) before I fell down...down...down...and downer still. I saw many things during my fall, such as a golden egg, a blood red stone, and a crystal ball. Then, I touched ground. Imagine my delight when I saw before me a gorgeous castle and shining lake, with robed students milling about and laughing happilly! What a world I fell into...surely this was the best by far! I looked to my left and saw Diana licking her paw contentedly beside a very old and gnarled willow tree. "Are you a muggle?" I turned around to see a girl with brilliant red hair looking at me curiously. I asked her what a muggle was, and the my story here started to unfold. I learned her name was Ginny Weasley and that the castle before me was Hogwarts School of Witchcraft and Wizardry. I told her everything that had happened to me as she looked on with surprise. After she heard my tale, she replied that I couldn't be a muggle if I had the magic to apparate here. Let's just say, that it took a full day for Ginny to educate me on the world I now found myself in. I learned that apparating is how witches and wizards travel from place to place--well I always thought I was mad, but I guess I am a witch now too (which makes it that much better!) I was later sorted into Hufflepuff--where they are loyal, brave, and true. I am very much at home here in this wizarding world, because I am not the only one here who is mad!