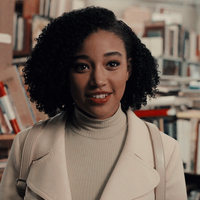 Zoey is a half-blood who spent most of her younger years living in the muggle world. Her parents were wizards who were curious themselves about the muggle realm and also wanted their children to experience both wizard and muggle cultures.

Zoey, like many of the muggle boys her age, played several sports as soon as they were old enough. Zoey played the usual baseball, football, and soccer that the boys played, but she also played a form of at her home with her father. Quidditch won over Zoey's love quickly (despite her knack for basketball), especially the position of beater. Beater was a great position for Zoey to play because it's been proven that whacking at some bludgers has been able to calm Zoey's temper.

Even as a younger child, Zoey had a quick temper. It was so bad that her twin sister would give her treats in form of chocloate frogs on days that she didn't ahve any outbursts. Still, the days where she got her treats were heavily outweighed by the days that she didn't. She had angry outbusts frequently, mostly out on her classmates, which resulted in a severe lack of friends. It did help to prevent the secret of magic from getting out to her classmates on her part, however. If she had no friends, then there was no one to tell about the family's magical times together at the home. Her sister, on the other hand, couldn't help herself, despite her parent's warnings.

When the teasings hit, they hit hard. Zoey couldn't watch her poor sister get bullied, especially bullied about what was the truht. And because Zoey loyalties laid with her family, he decided to take action. This lead to confrontations, and then fights. There were a lot of fights and they got so bad that the school decided to suspend Zoey from school. She sat at home, helpless, while her sister was stuck at school, being tortured by her pupils. her parents had said something to him about how fighting wasn't right, and it wasn't hte other kids' faults that they didn't understand magic, but Zoey hand't paid much attention. He was set in her own thoughts and mind; her and her sister did not belong. Their letters from Hogwarts couldn't have come at a more perfect time.

They came in the middle of the year, but because of the hard time thier children were having, they decided to give them an extra long vacation before school at Hogwarts started up again for a new year. Their parents told the school that they were moving their children to a different district and 'transferred' them to another school in that area. In the end, they did move to a place far away from muggles and with only a few wizard neighbors still a good distance away. Zoey and her sister have never been happier.
Accio Profile Posts...