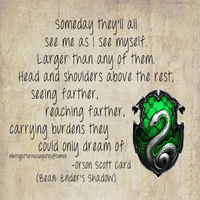 Hello there, I'm Rebecca and I'm a Slytherin and my personality type is INTJ (MBTI). The Sorting Hat was thinking about either putting me in Ravenclaw or in Slytherin, but after a few seconds it decided to put me in Slytherin, because he saw that I value knowledge in order to achieve my goals, instead of knowledge merely for the sake of it. I'm not entirely sure what my favourite classes are yet, as I'm quite new to them all, though I enjoy astronomy and classes to do with languages. I'm from a moderately well-known pureblood family, most of my family members are in Ravenclaw or Hufflepuff, but there are also a few Slytherins, like my sister and I. My blood status doesn't really affect my social status much, I've always been treated normal by everyone. I get along really well with my family, my parents are divorced and I've got a stepmother. I've also got a younger sister, and an older stepsister and -brother. I have a cat called Kruimel, he's socially awkward and I suspect he might be autistic, he likes me, but he doesn't like strangers much, especially not if there are many people around. Apart from people, he's not afraid of much, except for plastic bags and muggle vacuum cleaners.
I was born at the end of the Second Wizarding War, so that hasn't affected me much. My greatest strength is probably my intuition, which has helped me a lot over the years. As a Slytherin, I don't discuss my weaknesses in public, just out of principle.
I don't really know which career I want to choose yet, as they're all a bit limiting. I do know that I want to use my magic to make the world a better place, starting with myself and my ultimate goal is to be happy.
Accio Profile Posts...