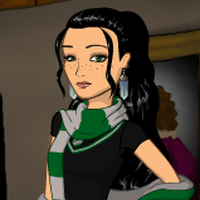 I grew up in Wales to a father who owns a magical weapon shop ((seriously scary stuff!)) and a mother who owns a shop with magical items ((she has to keep hiding the new shipment of crystals and oracle/tarot cards that come in because I want everything!!!)). While they aren't my real parents, they've always treated my as if I was their real child, as I'm the only child that they have. They found me as a baby one night on their doorstep and kindly took me in and took care of me. Before I started coming to Hogwarts, I'd go with my mom to her shop every day where she would teach me magic and would even homeschool me from there as well. Since I was an 'abandoned' child, my parents weren't sure if I was a witch or not, so I didn't officially join Hogwarts until my 4th year; being homeschooled gave me that advantage. Plus, I'm still not sure if I'm a witch since I can do spells without my wand and I've been known to levitate randomly whenever I get too into reading a book.

In the middle of my 4th year at Hogwarts, I began to experience some issues with my magic as doing spells was become quite difficult with the use of my wand and several accidents were happening along the way. My levitation issue was becoming a huge problem and I was starting to get awful nightmares that caused me to lack sleep at night. Due to this, I ended up going home for awhile and agreeing to do what my parents have asked me since I turned 11; if I wanted to find out what my bloodline was. If it wasn't for all the problems that were happening, I would have kept on rejecting since I was happy about not knowing what I was; but now I just had to know, so I could control what was going on with my magic. My parents took me to St. Mungo for some blood tests and it turns out that I have two "not so great" bloodlines running through me; Fallen Angel and Demon with the Fallen Angel blood being much stronger than the Demon blood. With this new knowledge I returned to Hogwarts and spent a good deal of my time in the library to study up on those creatures and what I could do to control my magic. Needless to say, I was very happy with what I found and am now able to control my magic much easier! However, I still have some difficulty with my wand, so don't be surprised if you ever catch me doing magic with my hands; it's much easier for me that way.

I'm a very shy and quiet person, so it'll take awhile for me to warm up to people, but I do get a little hyper once you get to know me. I wish to become a Magizoologist while doing some Divination on the side; if I can, I'd like to open up a Divination shop later on in my life.

I have traveled to the Muggle world several times before and it's interesting that there are people out there who sell the kind of items my mom does, and even hand make some of the items as well. I've gotten into reading some of their books and have fallen in love with an author named Tolkien. I own every one of his books and carry them with me whenever we go on trips to visit family in a different parts of England. I've even learned about a show that Muggles watch on a screen called Supernatural and I was lucky enough to not only get books about this show, but also a journal as well. Seriously, they should teach this journal here at Hogwarts! I've found a lot of interesting things about other creatures out there...and how to destroy them as well.
Accio Profile Posts...