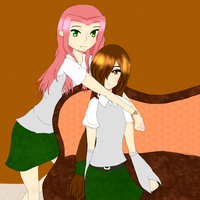 "Fear is the greatest enemy of the mind, and I shall fear fear for making me feel its fear."

I was sorted into Ravenclaw as a result of the Sorting Hat's decision. I wasn't a hatstall, nor a very quick 'Sortee', but I was the average, four-minute sorted student that was also a freshwoman. The Sorting Hat debated whether I should be sorted into Hufflepuff or Ravenclaw, since I was both timid and smart. Finally, it decided on the latter, and here I am, writing this part of my backstory for you wizard and witches to read.

I was a Nekomimi, a Cat-girl, a cross between a cat and a human, but do not fear me, since, as I already said I was timid, I am sure I won't hurt you. My family were all cat hybrids too, but they were soon killed in the first Wizarding War except for my older brother who works as a employee of the Hog's Head.
Accio Profile Posts...