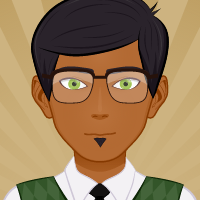 I was born to Aliya and Malik Belshazzar on May 15th of 1981 in a little cottage outside of London's city limits. My mother was a brilliant witch who was the employee manager of the Muggle Liaison Office for forty years while my father was a muggle school teacher. My father was always fine with my mum being a witch as she had made to sure to warn him early in their relationship, unlike others. I was the youngest out of five children in our half-blood family, often receiving many hand-me-downs from my older 2 brothers and sisters. While the oldest of us all, Asim, never displayed any magical ability, the rest of us received our Hogwarts letters on our 11th birthdays.

Now being the youngest of five brought its benefits and disadvantages. Walking into Hogwarts for the first time took my breath away which was met a few whispers of "Oh look.... Another Belshazzar.... Soon they will be taking over the school!" When participating in the Sorting Ceremony, I was a hatstall as the Sorting Hat was debating between the houses of Slytherin and Hufflepuff. I was glad to be sorted into Slytherin after awkward silence filled the Hall as the hat was debating. The courses of Potions, History of Magic, Charms, and Transfiguration were some of my favorites as a student. I earned my N.E.W.T.s in almost all subjects excluding Divination and Arithmancy.