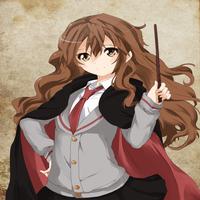 Originally from America, I was supposed to go to Ilvermony but I chose to go to Hogwarts instead. I am a distant relative to the Scamander line. My mother was from Hogwarts in Ravenclaw while my father was from Ilvermony in the house of the Horned Serpent. I am a highly gifted witch and have been practicing Magic from the age of eight. I excel in Defense Against the Dark Arts, Charms, Care of Magical Creatures, some parts of History of Magic, and Transfiguration. When I first came to Hogwarts, I was a hatstall and was nearly put in Slytherin before the sorting hat changed its mind and put me in Gryffindor instead. I also align myself with the American Hunters, such as the Winchesters, that hunt Supernatural beings, though I am just their informant. I'm the one that taught them to only hunt the bad ones. I also know the God of Mischief, Loki, on a personal level because he is my surgate brother. I am half-blood and am a total nerd, geek, and dork. I've also magic-proofed all of my muggle technology from going haywire when magic is present.
Accio Profile Posts...