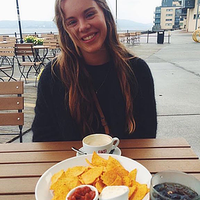 her mother was a norwegian immigrant, cast away from her pure-blooded family after being denied access to durmstrang for being, well, a squib. her father had been a welsh-born spaniard belonging to a half-blood family and was the only one out of his parents' five children to not inherit magic. the two met one hot summers day in scotland, where they bonded over being non-magical and their shared love for the beatles. that was the beginning.

three years and six months later, dagny soler was brought into the world. her father had invited the two of his siblings that hadn't shunned him from the family whilst he mother invited her entire family. none of them came.

dagny came into the world screaming and crying, blonde tufts of hair sticking up and down her small head as sparks flew and shocked and astounded the two squib parents and the doctor. it was in that moment that her parents knew she would amount to something great, something higher than the two of them ever could. she would get to grow up like a wizard, she would get to own a wand, to get a familiar, to go to hogwarts.

to her parents, that was the dream. to her, that was reality.