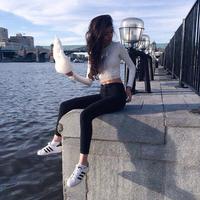 Why hello there. I'm the angel from your nightmare. *chuckles* Alright. Hello people. My name is Kaydence. Don't piss me off!
Followers (23)  Following (20)  Friends (20)

Every since I was a young girl, I believed in magic. It fascinated me. After all I was just a little girl who lived in Fairbanks, Alaska. I'd watch the Aurora Borealis every night and I enjoyed it and I always believed it was something magical. Then when I was four years of age, my parents Jeremiah and Marico Nyte, died. I was all alone in this cruel, ruthless world. I was sent to an orphanage and I cried myself to sleep every night. I felt so alone and I didn't want to live anymore. Then when I was thirteen, a boy at the orphanage had angered me and I screamed out the word Crucio without knowing. He was in pain for quite some time. I was scared then, but I was scared a lot at that age. I wasn't sure what any of this newfound power was, but I was scared to explore it. Then when I turned fifteen a man came to see and told me I was special in a way that no one in the orphanage was. I was confused deeply as to what he was talking about. Then I understood that he was talking about my powers as a witch. I went to talk to him and he was gone. Then I got a talking letter that told me I was going somewhere special. That's when I arrived at Hogwarts, and now I am a sixteen year old girl that is figuring out who she is and exactly who her parents are. I know I will learn very much here.