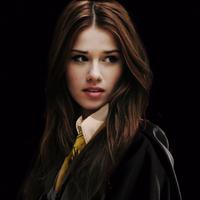 (Dragonologist) Dragons are among the most dangerous and magical of creatures in the world, wizarding or otherwise. I was first intrigued by them when I was standing in Gregorovich’s wand shop and he handed me a wand made of Hornbeam and Dragon Heartstring. We took an immediate liking to each other, and it has been my friend ever since. She has saved my life more than once, that’s for sure! Dragons come in a variety of temperaments, and while they can be persuaded to tolerate a Witch or Wizard’s presence, their mood can be quite the fickle thing. I came pretty close to being toasted once, but my partner warned me just in time and I was able to apparate away. Splinched a fingernail too, but compared to what I’ve seen that’s nothing.Less about the dragons, more about me.I'm the younger step sister to Harry Potter.He's waaaaaaaaay older than me.We were both adopted but our parents split,so my new last name is Seskius.We don't argue,but we compete.Harry's a Gryffindor,I'm a Hufflepuff.He told me I have a lot to look forward to,especially since I'm in my first year, plus , I'm already playing Quidditch! My dragon wand broke yesterday,I've only been here for a month! Don't worry,Ollivander gave me the perfect wand.Sycamore wood,unicorn hair core,ten inches and unbending flexibility.I used to go to ilvermorny, I was a wampus.I discovered my patronus, a Manx cat.Saying goodbye to ilvermorny was pretty hard,I had a lot of friends.Hopefully Hogwarts welcomes me!
Accio Profile Posts...