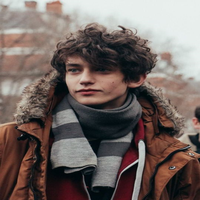 Hey there, suddenly back with a huge update. Changed my name and my story but still ready to rp and have a good time.
Followers (11)  Following (4)  Friends (3)

Elio was born in the deep valleys of Aotearoa, multi-racial he was enrolled in his tribe's Marae, the sacred meeting house where the magic passed down between ancestors was taught. He was sorted into Huruhuru meaning 'feather flight' gaining his white tui's mark on his neck for his excellence in his studies during his second year. During his third year, however, Elio was returning from his studies out by the great lake where the Taniwha resided when he came upon his Marae burning. The flames rearing higher and higher into the air, to this day no one knows who set the building alight. Some like Elio believe it was a pureblooded chief from a rival tribe who looked down on Elio's father, Marama for allowing the European settlers a place in the United Makutu Tribes sacred lands.
With nowhere else to go Elio was sent to Hogwarts alongside two of his friends until his own school is rebuilt, he currently is finding his time at Hogwarts both captivating and strange, all these new sweets and spells unfamiliar to him.
Back in New Zealand rather than Patronus's, they have HoaKararehe, 'spiritual companions and Elio's is a wood pigeon.
He does have a wand, although not often used as he prefers to use his hand is a Pohutukawa wood, 10 inches, unicorn hair core and a segment of greenstone dripped around the handle of the wand.
Accio Profile Posts...