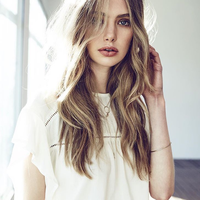 “Though my soul may set in darkness, it will rise in perfect light; I have loved the stars too fondly to be fearful of the night.”
Followers (175)  Following (194)  Friends (141)

Astrid has blonde, long hair that she loves pull into messy, half braids. Her eyes are of a spacial blue and are said to vary in brightness depending on how she is feeling. Her desire to know everything and beyond can definitely be seen in her look. Despite the pale, soft skin, her lips are always red and plumped. She is around 5'7'' (170 cm) tall and has an athletic yet graceful body.

Astrid's personality is marked by wisdom, just, reliability and bravery. She is a very educated and charming woman that is keen to achieve what she wishes for. Her courageous and rational spirit makes her be too frank sometimes, mostly with people lacking honesty. People should be careful with what they are saying around her and never even try lying: she hates lies and pretenders, so be true to her.

Astrid Ilsø was born in Oslo, Norway on 30th of June 1994 inheriting viking genes. She has never known or met her natural parents nor know if they are still alive. The muggles Eva and Björn Ilsø were kind enough to adopt the little newborn. She was their only child and they raised her with love and understanding. Her mother, Eva, was a school teacher and her father, Björn, was a sailer. She had a quiet childhood in the mountainous village of Ulriken, Norway, where she lived with both her step-parents until the age of 11.

In 2005 Astrid started attending one of the most secretive of all schools about its whereabouts: Durmstrang Institute. She spent there five years, getting extraordinarily good in Dark Arts, mostly practicing Legilimency and Occlumency. Astrid's step-parents' sudden and mysterious deaths made her leave Ulriken and shelter into Hogwarts. As soon as she got there, she had to be sorted, but turned out Astrid was a hatstall. Finally, the new student was sorted into Ravenclaw. In the following two years, Astrid became passionate about Defence Against the Dark Arts, Transfiguration and Herbology, in which she took her N.E.W.T.s, along with Charms and Potions. By the age of 16, she managed to become an Animagus, but registered as one only after two years, when she decided she would choose the path to becoming an Auror.

She left Hogwarts in 2012, starting her Auror training immediately after finishing the school, being considered fully qualified for the job. Her studies in the Durmstrang Institute helped her a lot in this situation. In 2015, Astrid finished her training and starting working for the Department of Magical Law Enforcement of the Ministry of Magic as an Auror.

Astrid has her own house in London, but does not spend much time there, as her Auror position requires her to travel a lot. However, she loves her job and would not choose a different one.

Even though years have passed, she never stopped seeking answers to questions she started asking at young ages: Who were her real parents? Why did they leave her? And the hardest of all: why did her step-parents die?

(( In roleplays it is not necessarily for me to roleplay as Astrid having her actual age, I can also go for her younger years, while she still was in Hogwarts or Durmstrang.))
Accio Profile Posts...