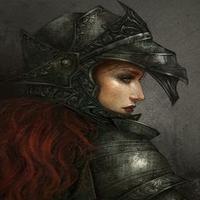 Age: none of your concern

Relationship status: single, not really looking but will still flirt

Sexuality: varies from time to time, but will gladly flirt with anyone

Personality: very sarcastic, flirtatious and cranky. Sort of like a rubber band, push her too far and she'll snap.

Wand: anything she can borrow (steal)

-Hair and eyes go a dark black
with certain emotions, such as fear, anger or stress
-Skilled at pickpocketing and torturing
-Reading minds is a strongpoint

Skin colour: pale, slightly pink with freckles all over.

Hair length: depends on the time. Modern day or future, ear length. Viking times or earlier, braided and hip length. Other, just in a bun or ponytail.

Usual/preferred clothing: again, depends on the time, but will almost always consist of a black cotton cloak with hood, and dark brown lace up boots.

Accessories: from early Victorian era and up, always wearing gold necklace with a small diamond heart at the end.

Tattoos: a sleeve of ancient writing and runes on each arm, along with a large outline of a rose on the back of her hand.
Scars: Almost every inch of her is covered with scars, from the one reaching from the top of her jaw to her collarbone, or the few on her hands and arms, to name a few.
Smoke: only when extremely stressed
Drink: almost always.
Swears: swearing basically makes up most of her vocabulary

Strengths- Fae have natural strengths, such as speed, strength, and enhanced senses. Lizzy has the ability to read minds, and talk to other fae mentally. She can take more hits than a normal human, but still bleeds and dies the same way. She will always outlive humans, being immortal and all, but can still die from wounds.

Weaknesses- for you to figure out


Lizzy was raised in a small village in Northern Ireland, her father a blacksmith and her mother an artist. When she was roughly fourteen years of age, both her parents were beheaded for suspected treason, which was later proven false. But she was given a choice: she would either join their heads hung from trees to scare attackers away, or she would be banished from the village, never to return. She, of course, chose the latter, but that left her stranded with little to no survival skills. Which forced her to become the person she is today.

She found her way to another, much larger village, who took her in as one of their own. They trained her in the art of sword wielding, teaching her every possible way to kill someone, and how to keep them alive. She became a warrior, as her name suggested she was. As time went on, and they slowly died off, so did the way of life. Villages turned to towns, with houses and boats. Around the eleventh century is when she really earned her title, becoming an assassin, thief and leader. Lizzy made a life off of blood, slaughtering those who wronged her, and working her way up to royal status, if it could even be called that. She ruled a tiny empire for years before becoming bored, and killing them too.

So she traveled, making her way from country to country, leaving a trail of bodies behind her. And she still travels to this day, and is now known as one of the worlds most brutal killers.

(I'll finish writing this at some point, but you get this for now)