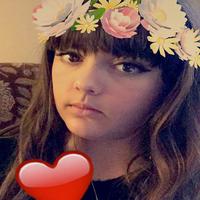 When Bella married into the Lestrange family, she did so only yo follow tradition, and not be burned off the Black family tree.

But little does the public know, in order to also not be burned off, Bellatrix would need to conceive a child with her new husband.

Before they were caught by the ministry, they successfully had a child. Bella, fearing being caught by the dark lord with her first daughter, Bella left her child to a close friend of her's, a loyal death eater who told them how he planned to evade the ministry if caught.

The Death Eater's plan worked, and the child would grow under the customs of the Death eaters, Aquring curly brown hair and maroon eyes.

Today, she attends Hogwarts in hopes to peruse the destiny within the hierarchy of the death eaters. She was accepted into slytherin house, and participates in the dueling club as one of the top duelisists of her year.
Accio Profile Posts...