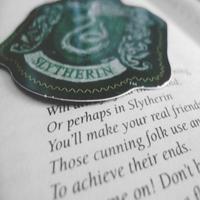 Name: Autumn Rose
House: Slytherin
Year: 1
Strengths: Wouldn't let anyone hurt the ones she loves, she's super smart but won't admit it, ambitious, and determined.
Weaknesses: Doesn't trust a lot of people, and she doesn't know to cope with her feelings so she keeps it all inside.
Personality: She's shy and quiet, observant, she hides in the shadows and is very cold and it takes a lot for her to let you in and break her walls down.

Backstory: Autumn Rose was born into a wealthy family, her parents Anthony Rose and Cassandra Rose were what you would call,'poster parents," they cared for their beautiful young daughter...but once she turned 8 things were terrible, the fighting, she would fall asleep to the sound of her parents screaming obscene things at each other and would awake to it too. From the outside of the Rose Manor things seemed blissful, but on the inside, at most, they were horrifying. When Autumn turned her parents decided to divorce, neither one of them wanted Autumn so she was stuck with her grandfather, Thomas Rose, he essentially trained her to be "perfect" or at least he tried, when it was time for her to leave she came out more damaged then she had been before.
It seemed the Rose family tried their hardest to contradict the name meaning,
'The girl name Rose is of Latin origin, from the Latin 'Rosa' meaning the Rose blossom, the romantic flower of love. Flower names began being used and became popular among medieval Christians in the nineteenth century as the rose flower was associated with the Virgin Mary and also as a symbol of love and beauty."

because, you see there is no love in this family, and it left Autumn feeling used and abused