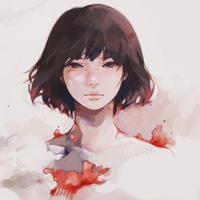 **WARNING: likes to lick as sign of affection**
Titles:
Murrur (by Anna and Moon)
Sheep Queen (by Anna)
Kueen Marge (by the Hamilfam)
Shippess -aka Marquess of Shipping- (by Amber)
Mura (by Tessie)
Year (classes): 1
Houses:
In order of compatibility, by the quantitative amount I've been sorted into each. :)
Hufflepuff
Slytherin (believe it or not!)
Ravenclaw (right behind Slytherin, actually)
Gryffindor
Relationships:
Romantic ones? None.
I'm grey-romantic, so most times, I have no interest in ever being in a relationship. To break it down, it's halfway between aromanticism and romanticism.
An RP partner...? Yeaaaa- No.
An IRL partner? Probably not going to ever happen.
Friends? I like to believe that I have plenty of them.
That being said, if you hurt anyone on here, that's not okay. HiH is a safe place where everybody belongs, and if you think that you have the right to cyber bully, you can see yourself right out. Now.
#Safe
Location: Good ol' US of A. :/ I just like to be optimistic. I mean, it could ALWAYS be worse.
I live in an apartment, with two roommates that you may have heard me rambling about.
Pet Peeves:
Bad Grammar
Irrational Ships. You know, the ones that don't make any sense. Yeah.
Slooties.
The Patriarchy
Yo Momma jokes.
House bashing. (All houses are equally fabulous, guys!)
Spam
***
Mara's Dictionary can now be found in the library, alongside another one that I'm working on: Red Badge of Honor. For more info, check my wall, and if you want to contribute a story to it, check this out:
https://goo.gl/forms/9zrKsY3nMTR0dR5r2
***
_______________________________
OC:
I usually roleplay as a younger student, though I imagine my character to be a younger version of Charlie Soules' Mara Smith in the fanfiction "The Fifth Marauder" (Make sure to check it out, it's pretty awesome!)
Personality:
Mara is rather bubbly and upbeat, and is prone to blabber at times, though she always means well. She can, however, be quite awkward in certain situations. Some say she talks too much, while others describe her as easy going. She has a fear of failure, and because of this, one of her weaknesses is not being able to say no.
Appearance:
Short, dark brown hair that is accompanied with some choppy, swooping bangs that come just about right to my eyebrows.
Doe-like, upturned eyes that glisten a dark hazel, and some stubby eyelashes flutter above them, though they are rarely loaded with mascara.
Short, and lithe, even bony, but often underestimated because of her size
Pale, pinkish skin, with a flush on her cheeks that is generally always there.
Wears black a lot, though Mara likes to stick to a minimalistic style that is comprised of little effort, and maximum comfort.
Interests and Hobbies:
Classic Muggle Literature
Music, especially old music
Quidditch (Mara's a keeper on this team: http://www.hogwartsishere.com/groups/3399/)
Baking Cookies (Literally the only thing she can bake ~well~)
Hugs!
Sarcasm
Cats
Wand: Ebony with a Jackalope core 12" (She got her wand whilst visiting cousins in America)
Patronus: (Eventually) Mink
Accio Profile Posts...