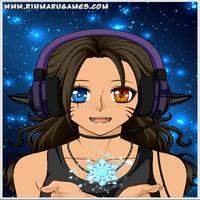 (The black things on my profile pic on the headphones are my ears...)

Name: Charity Diamond
Age: 15
Looks: She has auburn hair that reaches her waist. Her eyes are different colors, her left being teal, and the right reddish-orange. She usually wears a black tank top and black shorts. She wears black gloves that reach her elbows, and they have different designs on them. Her right glove has a red fire design, while the left has a watery design. She wears knee-high black boots. Obviously she likes black =P
House: Ravenclaw (obviously)
Wand: Red Oak wood with a Dragon heartstring core 12 ½" and Unbending flexibility
Patronus: Fox
What Patronus symbolizes: One perceptive states that the fox is a wise and noble messenger. Another views the fox as a trickster playing pranks, or worse - luring one to demise.

I'm shy when I first meet someone, but I'm very bubbly and energetic after I get to know you.
If I'm told not to do something, I immediately want to do that something.
I LOVE Five night's at Freddy's.
I'm a Muggle-born (Is that the right word you wizards and witches have?)
I want to be an Animagus (I think I spelled that right...)
The animal I brought with me is a spotted eagle-owl named Jackie.
I think that's it... I'm not sure...

This account is not quite what this actual character is. In reality, Charity Diamond is part wolf, having black wolf ears and a black tail with a white tip. She can control fire and ice/water (depends on how I feel at that moment) I can roleplay with this version if you want me too, all you gotta do is ask. I guess she's somewhat of a mary-sue? It's kinda unclear to me but *shrug* whatever =P If you don't want me to use this part of her, all you gotta do is tell me

This info is for a group I'm in. The admin is Theo Braith-Lupin (Teas)
This group is: http://www.hogwartsishere.com/groups/8301/

Charity was born on February 26th, 2009 to Isabelle and Timothy Diamond. Her parents usually got along okay, having an occasional fight, but what parents don't fight? Charity was a somewhat shy girl, always hiding on the sidelines and watching events from afar. She had a couple friends, but she mainly kept to herself, listening to music on her headphones and drawing in her notepad. Then the first bomb hit and chaos ensued. Her father was in the blast and died instantly. She and her mother started collect food, water, batteries, anything necessary to survival and hide out in their house. When terrorists started up, her mother told Charity to go on and take as many supplies as she needed for survival. Staying put was extremely dangerous, and Isabelle knew it. Charity couldn't bare to leave her mother, but she eventually did, taking an unusually big bag to make sure she could take as many things as she needed. She doesn't know how her mother is now, and it kills her inside to have left her like that. After spending a few weeks out in the open, something... happened... that she doesn't like to talk about. She disappeared off the world for a week. When she was seen again, she was a mutant.

Looks
Charity has auburn wavy hair that goes down past her chest. She has a strange condition which results in her eyes being different colors. Her left eye is teal, while her right is reddish-orange. Her left eye has a single scar downward. She has tan skin and wears a black tank top with black shorts. She has knee-high black boots and black gloves that reach her elbows. Being a mutant, she has black wolf ears and a reddish-orange and teal tail with a white tip. Her canine teeth are unusually sharp, and all her senses are heightened.

Personality
In this world, she is wary of everything. She would rather travel alone than trust someone in this land that has been decimated. However, if she feels she can trust you, she'll be a very fun person, being somewhat energetic and happy again. But if she has no one to trust, she'll stay silent and just keep surviving. She rarely talks, and likes to hunt if she runs out of food. I'd be wary of her, just like everyone else in this world.
Accio Profile Posts...