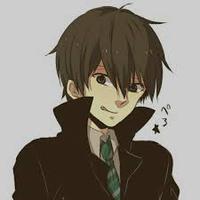 I'm a fourth year student from Applecross, Scotland. I enjoy life and all of the surprises that it brings!
My mother was a devoted follower of Voldemort, and she killed my father when I was seven years old. She then burned the mark of the Hallows onto my forearm, making many people fear me due to the mark traditionally meaning that the bearer is the embodiment of death. The death of my father has obviously affected my life a lot, and taught me to live in the moment rather then worrying about the future or fretting about the past.
My mother was captured and taken to Azkaban when I was nine. My sisters and I were placed in an orphanage, before my aunt Angelina won the court battle for custody of my sisters and I. Now I live with her, near my friend Alec.
I have two younger sisters named River and Raine. River is eleven, Raine is nine. I myself am fourteen.
My favourite subjects are DADA and Transfiguration, while my least favourite is Dvivination. When I graduate, I want to become an Auror and project wizards and Muggles alike from threats to society.
Accio Profile Posts...