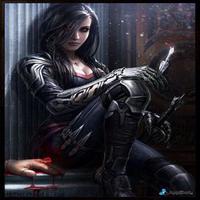 Nothing is as it seems when you're a natural psychic witch hosting an ancient demon.
Followers (30)  Following (14)  Friends (13)

I've always been a little eccentric in the eyes of my family- not wanting to uproot my life every few months, wanting to study and get ahead so that I could start working for the Ministry of Magic. It shouldn't have been much of a surprise when I was sorted into Slytherin during my first year at Hogwarts. It was as "different" as you could be in my family. I come from a long line of Gryffindor witches and wizards (and one Hufflepuff!), as pure-blood as one could be. My parents had the mentality that all life should be treated with respect and so their life work has been working with and studying Muggles. After the Second Wizarding War, they said that while stereotypes and prejudice may have lessened a bit, it still had a long way to go!

I was born in Australia where my parents were studying the people and its animals. They were absolutely fascinated that people would willingly swim in shark infested waters, wrestle with crocodiles and withstand the heat of a thousand suns whilst sharing living spaces with spiders the side of your hand. When I was two years old, we moved back to Europe where we settled into the hustle and bustle of the Eastern European magical community. My father fell in love with this part of the world and we stayed for quite a while, being visited often by my uncle Klaus who is completely obsessed with the magic of wand-making. I was home schooled during the early years before we moved back to England and started my education at Hogwarts.

I am now in my sixth year at Hogwarts. My favourite subjects are Charms, Defence Against the Dark Arts and Transfiguration. I always dreamed of working for the Ministry but since meeting Cassius, I can honestly say my heart isn't in it anymore. The life of adventure, curse-breaking and deciphering ancient codes and runes is the future I envision for myself, with him by my side. For better or for worse, we were thrown together in this crazy world and I don't regret a second of it.