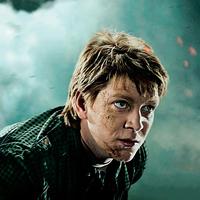 (Older Student) Nobody ever said it would be easy to be a Slytherin in her fifth year at Hogwarts. I come from the Malfoy family and I am currently dating the cutest person ever. (Fred Weasley). My parents kicked me out of the house because they think I am a so-called "blood traitor." When we went to Diagon Ally for my brother and I, I accidentally bumped into someone and when I looked up I saw that it was Fred. We started walking and talked the whole time. After we got all our school supplies I told him my dilemma. He told me that I could stay with him for the rest of the summer if I wanted to and I said it would be nice to get out of the house and said yes. That night I had my trunk packed and ready when all of the sudden I see a blue flying
Ford Angela coming toward my room. I see that Fred and his twin brother George are there and I got loaded up and got in before my parents woke up. He told me that I would have to share a room with their little sister Ginny and he also told me that they you could here them through the walls. When I asked what I had to sleep on he blushed. He told me that I could either sleep on a spare bed in Ginny's room or he offered to pull the spare bed into their room. I took the second option because I have already seen their house and I thought that Ginny's room was a little too small for us both to fit in. George told me other then themselves that I have been the only one to be in their room and I thought that if I would stay in their room because for two reasons. One, their room is huge and two, we are the only people who appreciate pranking. We got their super late and Fred offered me his bed to sleep on and that he sleep on their couch and I happily obliged. In the morning Molly gave me a big hug and told me that Fred has been talking about me since they got back from Diagon Ally. I looked over my shoulder and saw that Fred was blushing a bit. When we got to Kings Cross I saw my mom, dad, and brother were standing there. When we walked past them they didn't even acknowledged me. When we got on a train, Fred, George, and I shared a compartment. When we got there we realized that we were going to be Head Girl and Head Boy. After three months Fred asked me out and I said yes. We've been dating ever since and my parents still aren't talking to me. Oh well, I don't think they approve of my boyfriend but I don't care, I love and that's all that matters.
Accio Profile Posts...