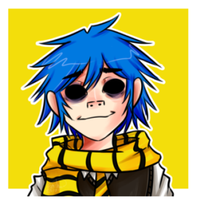 Hello! I'm Sebastienne Krause. I'm a first-year Hufflepuff, and I couldn't feel more at home in my House! My favorite class right now is Charms, but I'm so looking forward to being able to take Care Of Magical Creatures when I'm a third-year! Defense Against The Dark Arts is by far my least favorite class, and although Herbology can be rather boring sometimes, I've been told I'm rather good at it.

My mother was a Ravenclaw, and is now a mediwitch at St. Mungo's, and my dad...well, he WAS a Griffindor, but he got expelled his fifth year and refuses to tell anyone why (though I suspect he might've blown something up, because he's got strange scars on his arms and legs that he also won't talk about). Now he stays at home and looks after me and my younger brother, Aleric.

I would have to say that my greatest strength is also my greatest weakness; I'm on the Autism spectrum, which means that my brain works a little differently than most people's. I'm a bit more sensitive to things like loud noises or strong smells/flavors, and I can sometimes get overwhelmed by my surroundings and need to take a break. I also sometimes have trouble speaking clearly or making words, and it may take me a while to complete my sentence if I'm feeling stressed or overwhelmed. Luckily, most people in my House are very understanding and help me out when I need it.

I'm not entirely sure what I'd like to do after I graduate, but I know I want to work with animals! All animals, magical and non-magical, are absolutely fascinating to me! I love them all so much, and want to learn everything about them and help creatures in need however I can!

I think my favorite animal of all, though, would be my cat, Piccadilly. She's absolutely gorgeous (a ragdoll, we think!) and my best friend in the world! I found her while I was outside exploring a few years ago when stumbled across a mummy cat, and four fuzzball kittens. I only stopped to pet her for a few minutes, but when I started to go back home, she followed me, all four babies behind her like little ducklings! I convinced my parents to let them stay with us until the kittens were old enough to be on their own, but by then, I'd fallen in love with her (and I suspect my parents and Aleric had, too)! She would (and still does!) follow me around everywhere and let me brush her long fur and pet her for hours. So my mum talked to some of her friends at work and found homes for all the kittens, and Piccadilly stayed with us and became a part of our family! From the letters they've been sending, it almost sounds like they miss her more than me, although I'm sure our owl is happy to have the house to himself again!

I wish you a wonderful day, friend, and hope to see you around the halls sometime!