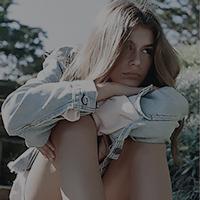 Having a Muggle mother and a pure blooded father, it was never easy to side with either one. Having very different opinions, Ruth Rose would grow up being conflicted with her own family and therefore never had the chance to discover her true self. She would be forced to side with either one, resulting in many endless conflicts. Despite ending up siding with either one, it's only now that she finally has the freedom to make her own choices, but this doesn't mean she's not aboard on the journey towards exploring more of her thoughts and feelings.

Making friends has never been the easiest for Ruth Rose, either. Being an only child who was very quiet and reserved, she never liked having interaction with other people, especially new ones. She would tend to push them away as she would normally come off as cold towards them and start off what you could call a friendship with a rude greeting. Getting accepted to Hogwarts meant meeting new people and having to work with anyone and everyone, even if she didn't enjoy it, and it was not the funnest of news for her.

On most days Ruth Rose can be found in the Potions Classroom trying out new things. She's usually never accompanied by anyone and prefers to be alone, as she has found that the wrong kind of company usually results in something going wrong. Therefore, she would quite literally growl at anyone who was nosy enough to keep pestering her as to where she was heading, or what she was doing in the potions class during free time. Sometimes it would result in the other person running away after Ruth Rose casting a rather nasty spell on them.

Ruth Rose is currently working on her way to becoming a Magizoologist, planning to work for the Body for Protection of Magical Species if all else fails. Her love for animals plays a big part in her life, and when she's not planning mischief and writing up something she considers newsworthy, she plays with the magical animals. If, however, this plan fails as well, the path of journalism will do for her.

Some of Ruth Rose's favourite people (ignoring the fact that they do not come from Slytherin—she thinks anyone outside of it are purely weak Muggles, but she's learned to grow on these girls):
— Geordie Venus Wellbelove; Ravenclaw
— Calla Bishop; Gryffindor
— Rosalind Bishop; Gryffindor
— Brittania Ixchel Mathers; Gryffindor
Accio Profile Posts...