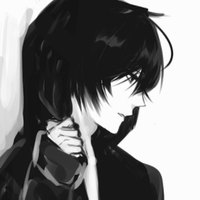 •What do you look like?
Satan. You're worst nightmare. Some emo shithead, idk.

•What's your tragic backstory?
When I was young, during an outing to the cinema, I saw my parents being mugged and killed. That was the moment I decided to avenge them. At 14 I studied criminology, martial arts, you name it endlessly to catch the man who killed my parents- but when I returned home, Gotham city was in shambles. This city needed a new hero- so I became that hero and have been fighting crime since.

Army was born in France to Margaux and Emile Moreau, where from a young age he realized he had magical abilities. When his no-mag family found out, they were more than furious, and he had to run away from home overseas to London. Once there, he was quickly taken under the wing of Mr. Rubeus Hagrid and was sent to Hogwarts School of Witchcraft and Wizardry to study his magical abilities.

He had been sorted into Slytherin, and he feared the other houses would turn against him- although he found it to be quite the opposite. After learning to defend himself against the bullies of his house, he was able to meet some of his closest friends there. Walking down the hallways, his Slytherin house crest stitched along the sleeve of his hoodie, he finally felt like he was home- despite the stares he got. Yes, the rumors were endless, and yes, some of them may have been true, but beneath his bleak expression he had an ounce of hope that the year would go well.