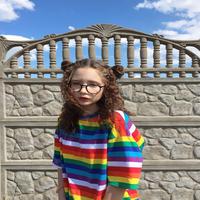 Poppy Belinda Callastrini spent the first ten years of her life in complete darkness. Born with a terminal illness, her muggle parents locked her in a basement from the day she was born, opting to abuse their only daughter instead of care for her. The formative years of Poppy's childhood were spent in a cage so small she couldn't even stand in it, and she was burnt and beaten and verbally abused on a daily basis. A domestic disturbance call was her saving grace; officers found the ten year old girl in the basement, stick thin, covered in bruises and burns, and completely silent. Poppy was taken out of the custody of her birth parents, and after time in the hospital, where she learnt how to walk and talk, the traumatized child was shipped off to an orphanage. She was only ten years old. It was around that time the shy, withdrawn girl began to realize that she wasn't quite like other children. No one else at the orphanage could make flowers grow from a mere whisper, or send sparks of light up into the night sky when bad dreams came to plague them. After a year of confusion and multiple magical mishaps Poppy received her Hogwarts letter, and was once again shipped off alone to a strange place. The clamor and craziness of the wizarding school is always overwhelming to Poppy, and the shy, traumatized girl spends most of her time in silence, tending to her plants and singing to herself.