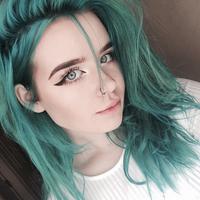 if you're seeing this, message me. i don't care if we've never talked; just do it. i want to see if anyone's paying attention after all this quiet.
Followers (62)  Following (160)  Friends (57)

~Lyra Rowle was born to Theodore and Pearl Rowle on August 20th.
~She is an only child.
~Although she is pureblood, she is fascinated with muggle culture, especially their books.
~She was sorted into Slytherin house upon arrival at Hogwarts.
~Her favorite subject is Potions, as she would always see her father brewing something up in the basement back at home. ~Her least favorite subject is History of Magic, it bores her to no end.
~Her patronus is a Ragdoll Cat.
~Her wand is 9 3/4 of hard sycamore wood with a dragon phoenix core.
~One day when her father got on the wrong side of Voldemort, and he swore that Theo would regret it. 10 years after Voldemort died, a group of vampires broke into the Rowle house and went up to the nursery. The eldest vampire picked up little, four-year-old Lyra, and bit her on the neck. As much as her parents tried to prevent it, she turned into a vampire.
~She is pansexual and questioning her gender

**This is a RP Account. Most of what I do on this account is not actually me; it's a character that I've created.**