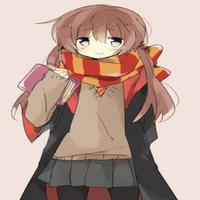 (Student at Hogwarts School of Witchcraft and Wizardry)

Name: Athena Carter Murphy
Age: Depends on rp
Patronus: St. Bernard
Wand: Birch wand with Phoenix feather core. Firm flexibility
Blood status: Pure-blood/ Blood traitor
Relationship status: In one for Yule Ball...(Matt Jacobs <3) But if it's okay with Y'all, I would be in one with Ron Weasley...:T

Description for Trio era: Well, it's not the easiest being a 4th year at Hogwarts, especially with all the exams and Voldemort running around loose...I am in the House of Gryffindor, and at the age of three, my mum and dad (Victoria Lin Smith and Carter Bay Murphy) were killed by Voldemort. I have a scar like Harry Potter's on the back of my neck, for the same reason. (The Avada Kadavra curse or the killing curse...) Me, Harry, Ron, and Hermione are great friends though. My favorite subject is Care of Magical Creatures, and I love Hagrid (My Godfather and professor at Hogwarts.) and his Hound Fang. I am very close to Dumbledore as is Harry. Anyways, about the sorting hat...Well, I chose over 3 houses. First Ravenclaw for intelligence I suppose, then Slytherin because I have a little bit of "Voldemort " in me...And finally, Gryffindor where I got sorted at last.I have an Elf owl named Ari, and a Bulldog named Rufus, which are both VERY beloved pets of mine. I was born in Greenwich, London and have no sisters or brothers, and my only living family(Not by blood, he's my Godfather) is Hagrid...My Patronus is a St. Bernard...Anyways...I don't necessarily know it, but I have a long lost brothers as well...I like Ron & other way around...UNLESS you do NOT like that arrangement and think I should leave it as it is, (Personally, I don't agree with Ron and Hermione. It doesn't WORK!) Just tell me! It won't hurt my feelings!! I got other RP people too... check them out!

Description for Marauders era: My Marauder name is Eaglefang....(NOICE) My backstory is the same except for the whole Voldemort thing, um...Idk how my parents died, I live in an orphanage...Still in GRIFFINDOR! And I'm proud...I turn into an eagle because I'm an unqualified anagmus like everyone else. My Patronus is also an eagle...Ima Marauder...That's it...;-;

Description of Cursed child era: I am the third and youngest child of Hermione Jean Granger and Ronald Billius Weasely. My siblings are obviously Rose and Hugo, both of who are older than me. I hope to be in Gryffindor and I'm good friends with Lily Evans Potter Jr. Her brother, Albus, Is quite a troublemaker. I've heard odd rumors about time-turners and...nevermind. My Patronus is a Saint Bernard and I still have the same pets as before. I'm a kind-hearted person, and I love animals and nature and such. So yeah... OR!!
Athena Carter Murphy-Weasley
Age: Do you really need to know? I mean seriously. *Eyebrow wiggle*
Blood status: Pure-blood/blood traitor
Relation status *Cough* Here (As a kid) I'm single -_-

I am an adult, and (As I said in Trio era, only if you want everything perfect like it is in the book, and you DO NOT want this) I *Ahem* Marry Ron Weasley. I'M SORRY! HE'S SO LOVABLEEEE!! xD But yea. In that case, our children would STILL be rose and Hugo...*Ahem* Murphy-Weasley. Yup.