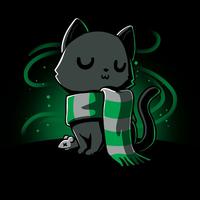 Hello lost and lonely wanderer to this random profile, I hope you live a life filled with cats and snakes - nice Slytherin snakes of course
Followers (0)  Following (21)  Friends (0)

I'm an American with a wizard mother and a muggle father. Growing up, I was always closer to my mother, and became involved in the wizarding world from a young age. We were all delighted when my powers began manifesting themselves, and eagerly awaited a letter from Ilvermorny. However, when it came it was accompanied by another invitation, one to Hogwarts. Apparently someone had taken notice of my interest in wizardry across the world, and my enchantment with the recent battle against He-Who-...I mean Voldemort. Although my parents protested, I convinced them Hogwarts was where I belonged, and am now completeing my sixth year. My graduation is almost here, and I'm almost certain I will go into some sort of law, perhaps governing magic internationally. I'll probably return to the States once I graduate, it's been hard being so far from my parents. Hopefully my time at Hogwarts will give me a unique perspective on life... I remember my first day, I was absolutely terrified. I've always been shy, and being surrounded by strange kids in a foreign country certainty didn't give me confidence. I was sorted into Slytherin almost instantly, and made a few close friends both in and outside of my house. I feel like all the personalities compliment each other here, but I'm definitely a Slytherin at heart- I feel like our house definitely has the right perspective on life, and even with my muggle ancestry I haven't seen much discrimination among my classmates, or at least not among my friends.
Accio Profile Posts...