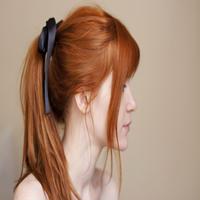 Moira Sayer was born on the 16th of May in 2001 to Killian and Diana Sayer while in America where her mother was assisting staff at Ilvermorny as the groundskeeper. Her mother, a talented squib with a knack for potions and interacting with magical creatures. Her father on the other hand was a talented duelist who had sought to hide in the states, escaping a past as a Death Eater, having been heavily pressured by his purist parents. Moira has never met her grandparents on her father's side. Relocating to Britain in 2011 her father became an Auror and her mother set up a farm in the countryside to breed creatures and collect any items from them that might have magical properties for her potions. A year later Moira received her acceptance letter into Hogwarts. Absolutely thrilled she received a half-kneazle kitten from her mother's kneazle, Erus's newest litter. She named the ocelot looking cat Sable. When it became her turn to be sorted, after much debate between Ravenclaw and Hufflepuff, she was dubbed one of the Raven's and settled in nicely with her house.

Having spent most of her childhood watching her parents or with her nose in a book Moira had a bit of an advantage when going into class. She also shared her mother's talent for Potions and bonding with creatures, as well as coming naturally to healing and defensive spells, a skill her wand supported as well. However she struggled immensely in Transfiguration, Dueling and Defense Against the Dark Arts, unable to cast spells with the same strength as other students unless overcome with a sense of survival and urgency. She does best when protecting and standing for the things she cares about despite her shy and nervous nature. While not particularly hot headed or confrontational she can become stubborn and quick to anger when in defense of friends and family, quick to stand by her morals and defend them vehemently.

Holding a love of books and knowledge Moira has always enrolled in every class she could fit in her schedule, spending most of her free time studying other subjects in the library or immersing herself in nature with animals and plants. Her and Sable have a close relationship, seeming to have conversations in silence and understand each other perfectly. Though somewhat shamed of her heritage Moira is determined to prove her own worth and help other in any way she can.
Accio Profile Posts...