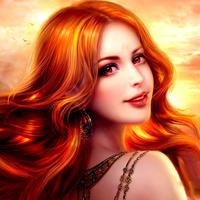 Hello, I'm Anna Soleil and I'm the Muggle Studies Professor and the Hufflepuff Head of House. Let me know if I can help you in any way!
Followers (700)  Following (20)  Friends (10)

Anna Soleil was born in a seaside town just outside of Dublin to a set of Muggle parents while they were both travelling. Her parents separated early on, knowing that they were better simply being friends rather than romantic partners. Anna and her mother moved to her mother’s hometown of Chicago, but Anna’s father was still very present in her life despite him living in Great Britain. The biggest surprise of the couple’s life was finding that their daughter was able to move things without touching them while she was playing! Having dual citizenship in both her father’s native UK and the United States, she actually received an invitation to both Hogwarts and Ilvermorny. She eventually decided upon the latter. While in school, she excelled in subjects involving Muggles (or as they were referred to at her school, No-Majs). After school she spent time at the Institute of Muggles, learning all about the connection between magical people and non-magical people, aiming to find ways to ease relations between the two.
Accio Profile Posts...