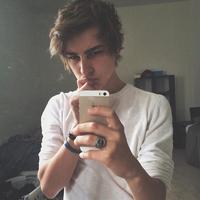 Please see:
All the things listed below are for roleplay, other than that.
Outside of roleplays I'm just really "rude", "annoying" and "mean" for minding my own business.

If you don't read this little note up here, don't bother saying hi. ^^^^

Occupation:
Works part time at an office of his Uncle, it's something like a rare exchanges company. (It's a lowkey shadow store where people come to ask for stuff.) (Usually a good place to start roleplays)

Overall:
He's usually popular even though he rarely socializes which may seem stuck-up. Most people are drawn towards him because of his easygoing and fun nature. Romantic, clever, gregarious, charming, sympathetic, also vain, critical, judgmental, and indecisive.

Abilities:
He can conjure up the dead or make familiars. (google familiars if you're not sure)
He also has the ability to read minds using a device(not telling ;) ) he keeps with him all the time.

Fun facts:
If you haven't already figured it out, I practice Black Magic but that has nothing to do with my last name.
I skip classes a lot so you'll most likely find me in the Slytherin's common room sleeping.
I have a tattoo on my wrist with the mark of my ancestors.

BACK STORY:
Growing up in a moderately rich but very traditional family can be tough, especially when you're living in this generation. Being a Black has it's benefits along with it's many many disadvantages like people always threatening my life. I mean, it's not any different with the other half of my family, the Malfoys. I don't like to brag, who would tbh? They're so "religious" as my cousin calls it, it makes me sick but I really can't see my self without them. I sometimes hate the fact that my parents are only together because of a stupid family alignment or something.

The Blacks have practiced Shadow Magic for centuries as much as I hate waking souls, it works out for me sometimes. Shadow magic is what makes us superior to most traditional covens but as I said before, there are enemies working towards clearing that up and wiping us out.
Accio Profile Posts...