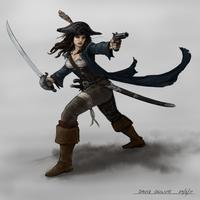 Wand: 13 1/4 Vine with Veela core
Sword: Magically forged by a wizard and a goblin from true silver, Valyrian steel, and pure energy, and tempered in seawater, mermaids tears, and krakens blood. It never loses its edge and carries ancient magic. The sword can block and absorb all but the most powerful spells, and can channel the magic of its owner in place of a wand.

I was born to a French naval captain who never had a son, so i filled that role. I learned everything about sailing and swordplay. Then the whole world changed. I was accepted into Beauxbatons and Hogwarts. My mother, a witch, had sent special applications to both. She was a powerful witch, and often sailed with my father, where they worked as a team. I could go to either they told me. I chose Hogwarts, i had only been to England a few times, seeking as how the two nations seemed to constantly be at war. At the time it seemed like a good idea, but I was constantly bullied because of my nationality. I got into too many fights and was eventually kicked out after a dueling match between a me and a Griffindor. We practically destroyed the third corridor. After i was kicked out I learned that my fathers ship had gone missing in the Indian ocean along with my mother. I went home and found that in the event of his demise, my father had left me the house and a large sloop, The Storm. There was also a package, within it was a flag. A black flag with a skull and two crossed lightning bolts. I raised a crew, and set sail. I went to search for my father, and along the way we learned the art of the pirate. How to run before the wind and tack across it to escape larger British warships. We became pirates. And we were good at it. I never did find my father, but I figure if I become a famous enough pirate, he'll find me. We leave the French alone, and had the insurance of safe ports. I currently reside in a chain of islands in the Atlantic.

Rping Rules
▹My rps are always Open unless I state otherwise
▹At least a paragraph (4 lines/sentences but feel free to write more. In fact, please do. I will be more likely to respond to you if you do.
▹Well written + detailed responses as well
▹Take the RP somewhere, create conflict or make something happen!
▹Do not act like you know Rena unless you've rped with her before. (I cannot stress this enough.)
▹You should be at least my level of writing or above (maybe a little bit below but I can't handle poorly written responses so...)
▹Do not God-Mod your character, make it realistic. No crazy feats of power or strength. If you're gonna use a spell, please explain what it does, even if it's a simple and well-known spell. I hate when people just rattle off incantations.
▹Honestly, I prefer when people rp in third person, but if you decide to write in first person and actually follow the rest of these rules, then I'm fine with it.
▹Make sure whatever happens is logical (in the world of the rp, of course). This means make it relevant to current day Hogwarts unless I specify something different. Other fandoms will generally be ignored unless you can coherently make it relate.
▹I request that you don't use asterisks. Like, at all. Just don't.
▹I won't reply unless your response follows all of these.


Sawyer Prewitt
Appearance
Roughly 5'7"
Red Hair
Fast Runner
Willowy in stature
Quiet, Somewhat shy, but not unusually so
Bisexual
Hard brown eyes (Not dissimilar to oak)
Birthdate-1835
Fair warning-I will swear, if that makes you uncomfortable than you can piss off.

When I received my Hogwarts Letter that day, lets just say it was a long day. My parents made a huge fuss when this nice old guy showed up on our front lawn OUT OF NOWHERE, and then tried to tell me mum that I had been enrolled in this special school for people who could do this thing he called magic. I though he meant like a performing arts school but dad just kind of lost it. Anyway, he covered up and said he'd already looked into all the schools in the area and there was no 'Hogwarts'. It was so weird because this old man just laughed and said, 'It's alright Prewett, she wont come to any harm', which is totally crazy because my dad never introduced himself. Anyway my mother, Mafalda, tried to shoo the man out, but he simply sidestepped and walked in. I'm telling you it was the craziest thing. He walked right up to my, looked down to meet my eye, and said simply, 'Its nice to meet you Sawyer, how are you today?' I can't remember what I said, but I mumbled something and the old man simply nodded and responded, 'I work at Hogwarts school of witchcraft and wizardry.' If I'm going to be honest, I have to tell you, I didn't care what this school really was all about, I was going. He kept talking, but I was already sold. The next couple of weeks I had a lot of conversation with my dad. It turns out that he had know all about this world, but had never been able to be a part of it because he was what they called a squib. He works as an accountant and apparently never gave much thought to his magical family. He sent Christmas cards but that was it. He knew I had had magic since I was five and accidentally froze my friends (literally) during a game of freeze tag. I knew there was something up, but we never talked about it. I never really had any big incidents since then (except for accidentally vanishing a soccer ball when I was ten-long story) and so I never really made a fuss about it until I learned that there is a whole school dedicated to teaching people like me. So dad agreed to let me visit his second cousin Arthur's house before school started.

My wand is made of vine, with a veela hair for a core. It is 13 and 3/4 inches and very flexible. I did not purchase my wand at Ollivanders. my father wanted to budget our money and so we found an old witch from the Mediterranean selling wands down in an alley. As we approached her booth, the wand I was soon to bond with started to heat up and emit sparks. The old women looked up, straight at me and motioned me over. She said that I would grow to be a great witch with this wand. It was a beautiful wand. It wasn't polished, and for the handle, the witch had kept a bark like texture. When she motioned for me to pick up the wand, it fit perfectly into my hand. As I held it, I was hit by a series of images, like memories, except none of them were mine. The old witch said that the wand was very old, almost as old as she, and had been one of her very first. She had sold it to a handsome young man who's quest for power had resulted in the expansion of the greatest empire the world has ever seen. His name was Alexander. The wand has had many owners since then, however every single owner died for reasons unrelated to violence or conflict. She told me that this wand had fought in every great European war since Alexander the Great, and that I should be honored to carry it. She said that I had an old soul. I could be on the next quest for power she said. Though I might not necessarily be in for the gain of power. This wand, she had told me, would see me to the end of my days, and if I tried hard enough, If I showed enough determination, I would be the last owner of the wand, I could live far longer than average. Perhaps even forever. My father said it was a load of crap, but bought it anyways.

After I finished my 7th year at Hogwarts, I was faced with the dilemma of choosing a job. I never cared about the money, for me it was always the excitement of life, the rush of blood through my veins. I chose to join the legion. We fought against the Russians in Crimea and in other wars. I wasn't the best witch, but I was a survivor, using everything I did know to my advantage. The only unfair fight is the one you lose. I learned how to win at any costs, and to survive anything. After I left the Legion, on my way back home, I was chased into a decrepit castle by two mountain giants. It was there I discovered my first treasure. It was a ring. Simple enough to look at, but I found that the gem contained a great deal of magical energy. Energy that I could tap into when my own reserves were low. I found that the skills I acquired in the Legion adapted well to the art of treasure hunting. And the thrill of a find was just the rush I sought in life. So, I became a treasure hunter.

Had to post this outfit that Victoire Featherthorn designed for me
https://www.polyvore.com/cgi/set?id=233472329

Wand
Same as Sawyer, Nereza is the owner of the wand before Sawyer.
Accio Profile Posts...