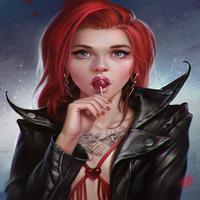 "Muggles disgusting creatures would ever walked this earth. I cant believe that some magical folk actually like them!" - Scarlet Rose
Followers (141)  Following (237)  Friends (94)

Name: Scarlet Marie Rose aka Scar
Physical Description: really pale skin, glowing red eyes which can turn blue whenever I want, red hair, average height and very strong athletic body.
Interests: Dark Arts, Combat, Sword Fighting and Romance comedy
Favourite Subjects: Dark Arts, History of Magic and Potions
Least Favourite Subjects: Care of Magical Creatures, Transfiguration, Divination, and Muggle Studies.
Patronus: Grey Squirrel
Animagus: Black Cat
House: Slytherin
Height: 5'4
Friends: The Sly Trio
Wand: Laurel, Phoenix feather, 11 3/4 inches
Boggart: Death/Blood
Blood Status: Pureblood
Relationship Status: Single
Family: Leonardo Domenico (Father - vampire king), Anastasia Rose (Mother - queen of the angels), Charles Domenico (Uncle - mother secret lover)
Lilith and Aurora Rose (Older sisters), Louis and Zac Domenico (Older brothers), Alexander Domenico (Twin brother), Xavier Domenico and Jasmine Rose (Younger sister)
My parents are also very influential in the ministry of magic being that my father is a minister of magic and mother being the head of the magical law enforcement department. However, they hatred of muggles reach much higher than all pureblood families combined. My family being descendants of Salazar Slytherin and have been in Slytherin for centuries. It`s no wonder they hate muggles so much. So me being put in Slytherin was really no surprise. I also have a dark side that you would not want to meet if you get on the wrong side of my wand. Other than that I`m actually a really nice person but be warned don't get on my bad side.

Don`t worry I`m a nice person out of character but I love being the villain in a story. So don't be afraid to invite me to RPs.
RP Rules
1. Clear grammar and spelling
2. Romance and Drama rp, if you wanna do something else feel free to let to know.
3. No dragging to story along, to the point were it makes no sense
4. If you wanna something more mature, let me know before hand
5. Just feel free to post a starter rp on my wall or owl me
Accio Profile Posts...