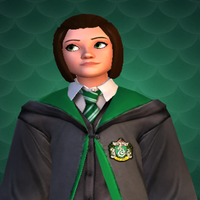 I don’t have a short temper; I just have a quick reaction time to bullshit.
Followers (7)  Following (3)  Friends (1)

At first glance, she seems to be a quiet and unassuming girl, serious even, with her pretty mahogany shade shoulder length hair, vibrant green eyes, and peachy complexion. Standing at about 4'10" tall, she is a bit on the tall side for a girl her age.

“Life is ironic. It takes sadness to know what happiness is.”

Jadelyn Quinn strives to stand out in a crowd.

As the youngest of the three Quinn children, she risked being overlooked on a daily basis. As an unplanned and unexpected child, she's "just there", no more and no less. And as the only girl, less favorable parenting behavior towards her caused by parental favoritism, arise from age-old traditional belief that only sons can carry the family name while the daughters are married off, taking on their husbands' surnames and become part of their family. In their skewed perspective, they believe only sons can inherit and protect the family assets and values. Little do they know that this has given her an independent streak.

Born into a family typically sorted into Slytherin, and well known for their purist sentiments, the Quinn children has always of course been taught to view Muggles and those wizards born of them as less then their own family. However, it has not made Jade hate them as some others in her family do. No, in fact, she pities them. After all, it is not their fault that they were born lesser. And in her own discreet way, she truly wishes to help them as she knew what's it like to be the less than favorable from her own experience. She just needs to make sure it does not harm her family nor her family name when doing so. After all, she has a reputation to look after.

Jade has showed promise from an early age when it came to magical ability. Though like most children, it tended to manifest when she was upset - usually due to one of her brothers excluding her from a game they were playing, or adventure they were having. This, along with the neglectful parenting, was why she had to learn swiftly to keep herself in the spotlight; circumstances demanding the once pleasant child to become manipulative, selfish and sadistic.

When I received my Hogwarts Letter that faithful day, I was both elated and scared as I didn’t know what it would mean.

Due to my family's heritage, and my own desire not to be deemed as a failure and bring dishonor to my family, I prayed that I carry on my family's long line of tradition.

When it was time for the sorting ceremony, the sorting took a while longer for me than for others, as the The Sorting Hat, the supreme authority of who got sorted where at Hogwarts, couldn't decide if I'd belong in Ravenclaw or Slytherin more, as it says "another Quinn? Hmm... you're tricky. Not as easy as your brothers. You're as rebellious and determined as a Gryffindor, and as hardworking and loyal like a Hufflepuff, and but only when the circumstances benefits you. Witty and sharp. Should you be in Ravenclaw? But this trait of yours are used for deceit and lies to get what you desire. I see that you are ambitious as well, a real goal getter, cunningly using any creative means to achieve your desired outcome. Just like those before you, just like a Slytherin!"

And when I was sorted into the coolest and edgiest house in this school, I sighed in relief. I didn't disappoint my family after all.

Once you’ve become a snake, you’re one of ours – one of the elite.

We play to win, not because we can't afford to lose, but because we care about the honour and traditions of Slytherin.
Accio Profile Posts...