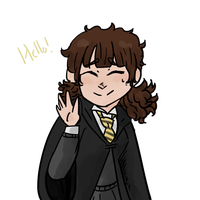 "Sometimes being blind is a blessing. For it makes me trust only their voice and their actions."
Followers (5)  Following (6)  Friends (3)

Xia grew up with a Chinese mother and a father, in a small little apartment complex that lay the three. Her mother was a simple woman, not born with magical powers, but born with the motherly attitude ever since she was in high school. She knew her daughter well, and to have given birth to her was a magical moment all together. Though it wasn’t exciting news to her in-laws that the child was born without sight. Disowning the father from the family and ignoring his pleads, he gave up trying to come back into his own family and instead focused on what he and his wife made. He loved his daughter and wife dearly.

She was very lucky to have her family that loved her deeply, however the lack of sight made it difficult for her to do daily tasks of walking and or doing anything that any normal person could have done. Though that didn't stop her from making her way towards excelling her studies as a child and getting her letter at Hogwarts. Saying goodbye to her mother and father and a couple of friends that she trusted dearly, she made off to a new adventure only to find that her senses will some day save her life through the halls of Hogwarts.

LOOKS: Xia Xing is 4 foot and 5 inches, and will reach 4’7 during her final years in Hogwarts. She was born with NLP (No light perception) and has kept her dark brown eyes closed for the reason of not using it. Usually having messy unkempt dark brown hair, she tries to maintain a sustainable length of a bobbed hairstyle with bangs that cover her forehead. Regularly she puts her hair into two uneven pigtails, that usually end up with one having more hair than the other. Even though she thinks it’s even, to the regular eye everyone thinks she’s doing it as a fashion statement. Her peach toned skin with a hint of blush that scatters her face as she walks the halls.

PERSONALITY: She knows about the difficulties on becoming a witch that has the disability of being blind but that isn’t stopping her from obtaining that title. Living in a small town ever since she was a young girl brought her to the world that spiked her interest. Though ever since she was born, she saw the world as black, that didn’t stop her from thinking of the colors in her own way and she saw people in a new light than what everyone expects. Though she may have been fooled more than once in her childhood, that didn’t stop her from trusting others if they trusted her first. She had no trouble giving her trust to anyone and her friends and strangers didn’t have any trouble giving it back. Though she has lost friends in the past due to her lack of understanding the situation at hand, her mind has grown to greater exchanges. That lead her to giving her loyalty to the ones that cared and took time out of their day to help her understand that changes must be made. Some of those changes were to go into Hogwarts and grow from the exchange there.